Update: The giveaway has ended. Congrats to Lisa T. for winning the giveaway!

This visually stunning group from Japan wowed judges on the 10th season of the show, earning the “Golden Buzzer.” And, now they’re touring! Omaha Performing Arts is bringing them to Omaha to perform at the Orpheum Theater on March 8. (The giveaway has ended). You can save 25% off PL1 and PL2 tickets with the promo code OHMY! Be sure to purchase tickets at TicketOmaha.com.

Disclosure: I’m receiving complimentary tickets to the show in exchange for hosting this giveaway.

So, this video, guys. Looks incredible, right? It’s got kind of a Blue Man Group vibe but more modern. My kids are going to love this show.

Siro-A fuses groundbreaking visual effects with puppetry, mime, and a huge dash of techno music for an entertaining show that the judge Mel B described as “so exciting, jam-packed full of creativity.”

What you need to know about Siro-A

The performances is on March 8 at 7 p.m. at the Orpheum Theater, 409 S. 16th St. Since it’s part of the Family Series, you can be sure it’s completely kid-friendly and it’s not going to be a super late night.

Having been to many, many shows through the years in the the Omaha Performing Arts’ Family Series, I can also assure you that you’re going to love it as much as your kids. 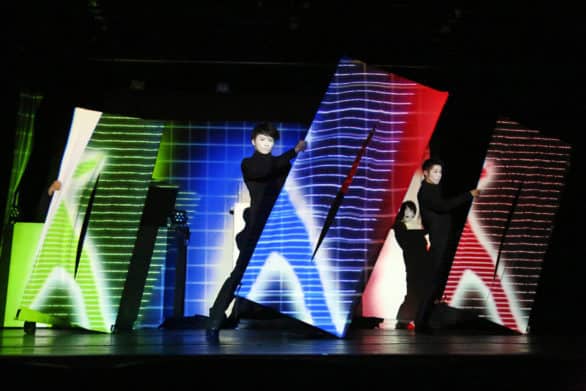 Tickets are available starting at $20. Be sure to get them through the official ticket seller for Omaha Performing Arts, Ticket Omaha.

Omaha Performing Arts is sending one reader to the show! The winner receives FOUR (4) tickets to the performance on March 8. Tickets are only valid for this one-night-only show and cannot be transferred to another show. Must be 18 or older to enter. Giveaway ends on March 4 at 11:59 p.m. I’ll email the winner on March 5. Due to the quick turnaround, the winner will have 24 hours to respond to the email before I draw another name. Good luck!

We follow on IG at @thewalkingtourists. I have watched a few seasons of AGT. I enjoy so many different acts it's hard to choose.

My kids would love this!!

Going to show either way, taking kids wife and mom

My daughter and I love America’s Got Talent! I love watching the dance acts!