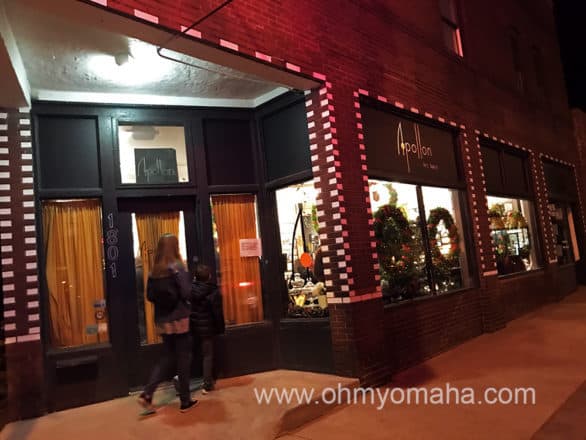 Apollon Art Space is in the charming Vinton Street Neighborhood, not too far from the zoo in Omaha.

What is the Apollon

I go into detail about the theatre venue & experience here, but briefly, it’s collaborative theater where there’s the performer, there’s you, and then there’s what goes on between the two of you. 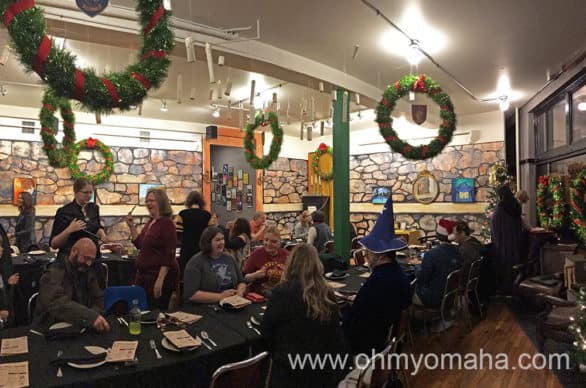 “Holiday at Hogwarts” involved dinner served family-style at banquet tables. Houses were allowed to mingle, so my Hufflepuff kin could sit with me.

We attended the super popular “Holiday at Hogwarts” opening night this past weekend. I bought tickets, but then Apollon upgraded them from regular to Deluxe so that I could review the experience for you.

Frankly, my review’s not needed. Nearly every performance is sold out. BUT, if you want a ticket, you can go solo to one of the remaining shows with a seat. Check dates here. Next year, buy tickets to “Holiday at Hogwarts” early.

You may have noticed at the end of a show’s listing the following: “This event is intended primarily for adults, but is suitable for all ages.” I’m guessing the experience is a lot of fun with a group of adult friends. I don’t know. I keep bringing my kids. But everyone around us was a group of adult friends and they were having a blast. Maybe Mr. Wonderful and I should go without the kids sometime? 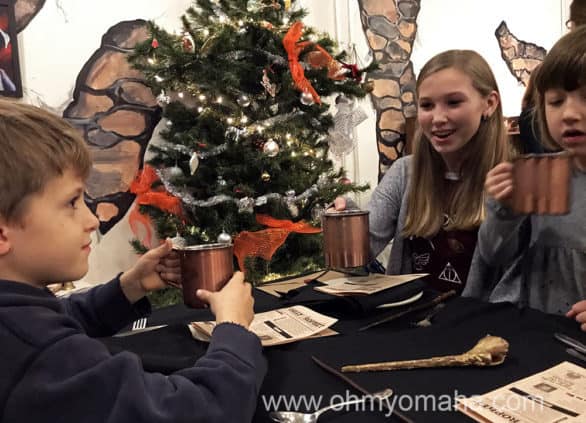 The toast before the first sip of butter beer. Deluxe tickets to “Holiday at Hogwarts” includes a complimentary non-alcoholic butter beer. The show runs through Dec. 30, 2017 at Apollon Art Space in Omaha.

But bringing a kid can be pretty special (and if you ask me, it really tests the actors’ improv chops and reflexes).

For “Holiday at Hogwarts,” our excitement started with the acceptance letter arriving by mail. Shock. That’s the look on their faces. I got several “!!!” on a text from my niece after she got hers, so there you go. To get a ‘tween excited about anything, you know it’s special.

Tip: The Deluxe ticket to “Holiday at Hogwarts” includes a Hogwarts acceptance letter, souvenir ticket, VIP wand service and wand at Ollivanders,10% discount at all Hogsmeade shoppes, complimentary stationary and owl service to send a letter from the Hogsmeade Post Office, one free glass of butterbeer, and everything you get with the standard ticket (Hogwarts classes, Christmas feast).

Once we were in the theatre space on Vinton Street, my kids were all in, especially my 6-year-old. She and my son were definitely the youngest ones there, but also enthusiastic participants. My daughter went to every professor multiple times to learn more magic (she was totally sold on her wand and its abilities). 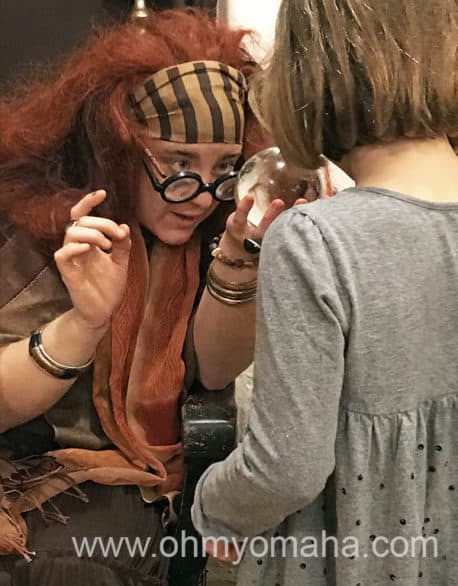 Melanie Prentice as Trelawny looking into her crystal ball between classes at “Holiday at Hogwarts,” the annual Christmas show at Apollon Art Space in Omaha.

Trelawny read my daughter’s fortune and gave her some little trinkets and now she has a plastic baggie in her room with her scribble on it stating “Pretty things.” It’s adorbs.

But there are some down sides. The show doesn’t start until 7:30 p.m., and goes on past 10, which makes for a late night with kids. Plus, for this show, the food is served family-style and if you child is the slightest bit picky, he or she will find something wrong with what’s served. We had roasted chicken (acceptable for both kids), bangers (sausage, not acceptable), potatoes and carrots (not acceptable), bun (acceptable), and three kinds of desserts (only the chocolate frog was acceptable).

We also had drink tickets for butter beer with the Deluxe tickets. There’s alcoholic and non-alcoholic versions. My niece liked the butter beer, but my two off-spring did not. I tried both versions and say to you adults, drink up the alcoholic stuff. It’s costs a little more, but tastes so much better. 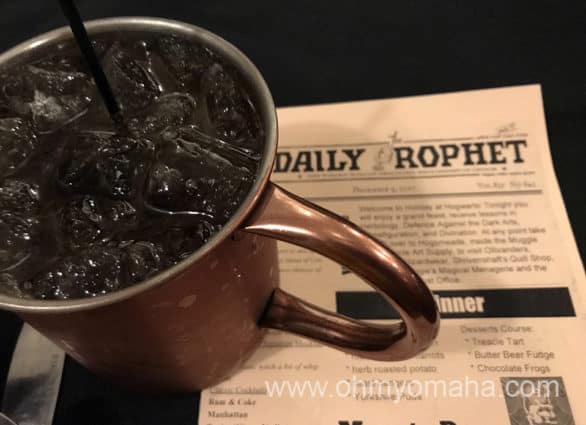 And lastly, part of the show’s activities were held at Hogsmeade, located in a muggles’ art supply store across the street. This freed up space in the Apollon, but also required us to cross a street at night. If you’ve been to the Vinton Street area, you know muggles don’t take that curve slowly. You should definitely not skip Hogsmeade, especially if you got the Deluxe ticket. You pick out wands, send Owl Mail, and if you’re my kids, beg and beg for a magical pet (hand-knit animals for sale there).

There are different types of performances that occur at Apollon Art Space. Like I said before, “Holiday at Hogwarts” is nearly sold out. Check for tickets here.

The next show is a murder mystery dinner experience called “Murder in a Jerkwater Town.” My 6-year-old thinks it sounds like a delight. I’ll step in and say this sounds like a fun date night or friends-night-out more than a family date night. Tickets are $25 each and include dinner. Cash bar. Purchase tickets here.

Parking: Park on the street, and if you can’t find a spot, there’s overflow parking at the Supermercado Nuestra Familia, 1826 Vinton St. 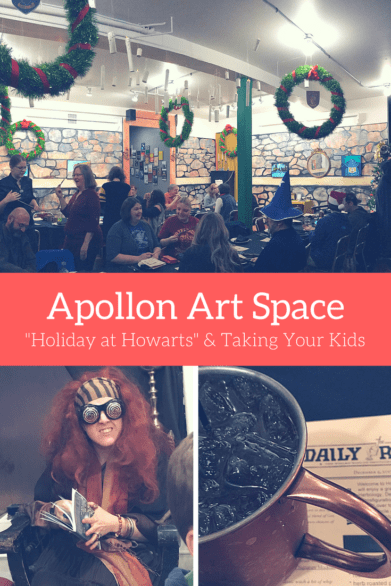