I had a mom-and-son date recently to the Omaha Community Playhouse to see “Around The World in 80 Days.” It was my 7-year-old’s first time seeing a production there. Fun, right? 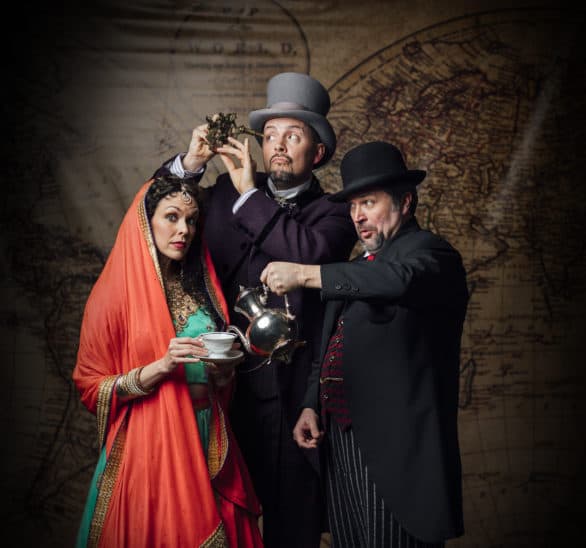 Teri Fender as Aouda, Anthony Clark-Kaczmarek as Phileas Fogg and Ablan Roblin as Jean Passepartout in the play “Around the World in 80 Days,” on stage at the Omaha Community Playhouse. Photo by Colin Conces

Thanks to Omaha Community Playhouse for providing the review tickets in order for me to write this post!

– This is the live staged version of Jules Verne’s classic. A lot of language is antiquated and British terms that may be over kids’ heads.

– Lots of fun characters, all played by a small cast. My son was amused by Ben Beck and Monty Eich, in particular, who took on so many random roles throughout the around-the-world journey of Phileas Fogg (played by Anthony Clark-Kaczmarek). Granted, some reminded me a bit of

– Creative sets. The characters trek across the world by steamer, train and elephant. I think the elephant was the most creative piece of the set! 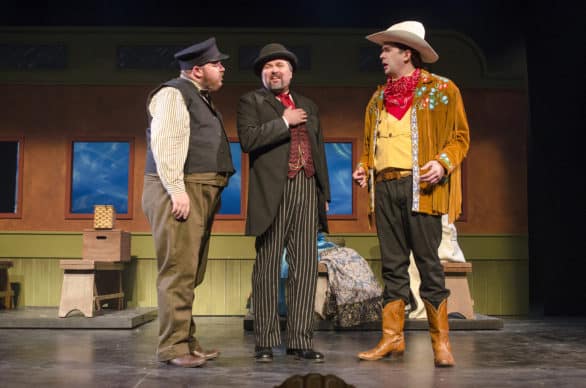 Monty Eich, Anthony Clark-Kaczmarek and Ben Beck are a lot of fun to watch in “Around the World in 80 Days.” Photo by Robertson Photography

There is an intermission, but the first half is very long. I recommend going to the bathroom before taking your seat before the show starts. 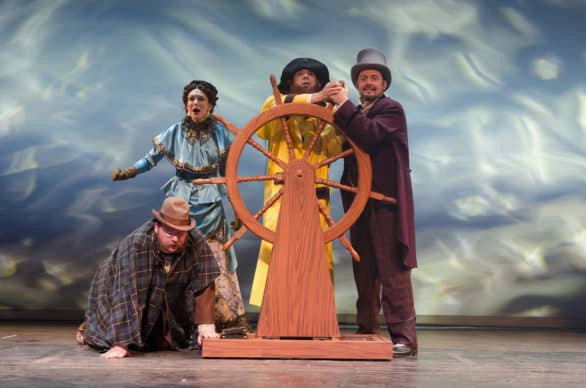 A funny scene in “Around the World in 80 Days” on stage at Omaha Community Playhouse through Feb. 12. Photo by Robertson Photography

Yes and no. This show is a lengthy theatrical production – 2 and 1/2 hours with intermission. It’s appropriate for the seasoned theater-going child who is used to a lot of dialogue. I would not consider bringing both kids to this; my 7-year-old has been going to shows for years and I knew he’d be fine sitting through it. I just didn’t know if he’d be interested). He was! There was a lot of humor in the show that made my son laugh aloud, even louder than some of the older folks there. The running gag about the detective’s fake name (“It’s Detect…Um Ah Figs”) was comedic gold to him.

It is not children’s theater, that’s for sure. The audience was majority adults, with me being on the younger side of the crowd.

I thought it was a clever production. Director Carl Beck did a great job encouraging the cast to infuse humor into situations that could easily have been done dryly. Even though I knew how it would end, I was still right there engaged to the very end rooting for Fogg.

“Around the World in 80 Days” is a fantastic journey filled with exotic locations and cultures, with comedy and suspense leading the way. Englishman Phileas Fogg and his French manservant, Passepartout, create a strange pairing with their distinct cultural backgrounds. The two men travel around the world in an unprecedented 80 days to win a simple wager, but they leave an incredible story about loyalty and friendship in their wake. This production consists of five extremely resourceful actors who bring Jules Verne’s incredible story to life.

When: Through Feb. 12; performances are Wednesdays through Sundays