Omaha’s vibrant performing arts scene has just about every kind of theater I could hope for: We’ve got the classics, the traditional musicals, contemporary theater, improv, and interactive dinner theater.

It’s the last one I’m going to write about. Well. Not really. Come to think of it, it’s a bit improv, and definitely contemporary, and there was some song and dance…

The Apollon Art Space is a little bit of everything, but most of all, it’s collaborative.

I was invited to attend a performance of the theater’s latest show, “A Very Important Date: The Untold Story of the White Rabbit.” I was encouraged to bring the kids along. I’m so glad I did. 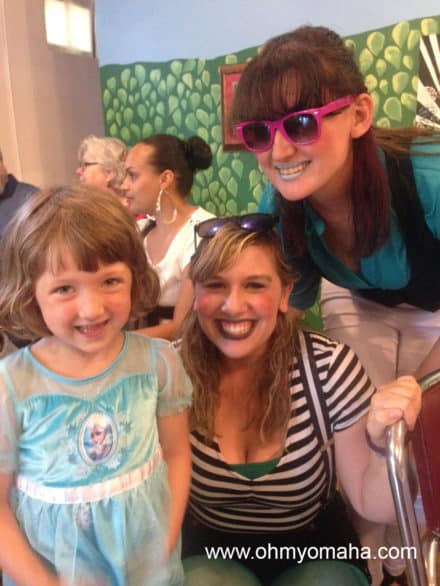 Dweedle Dee and Dweedle Dum were Mooch’s clear favorites from the performance we attended at The Apollon in Omaha.

They’ve become No. 1 fans of the place!

The Apollon Art Space is more than theater, and it’s not quite like anything I’ve ever experienced. It’s space for arts (I hope you deduced that from the name).

It’s based on three elements: “The performer, the witness, and the shared experience between them.”

Here’s where it gets fun for kids.

Their shows are interactive. You may influence the outcome of the show. You may be in the show. 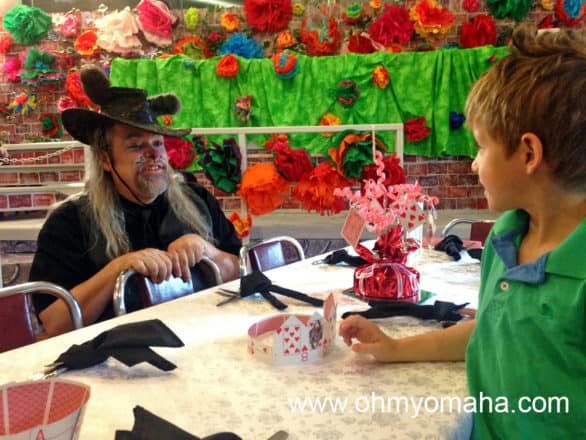 Farley chatting with the hare before the show began. Or had it already begun when we arrived?

This shared experience is everything for kids. And adults. For those of us not brave enough to step foot on a stage, it’s exciting to interact with the actors at The Apollon.

Our show was general admission, and rather than rows of seats, we sat at tables. You’ll meet some new people when you attend a show. Your experience becomes theirs.

My children’s enthusiastic reaction to a character or recoil from an oddly colored food was shared with the whole table. I’m fairly sure they found my kids entertaining. 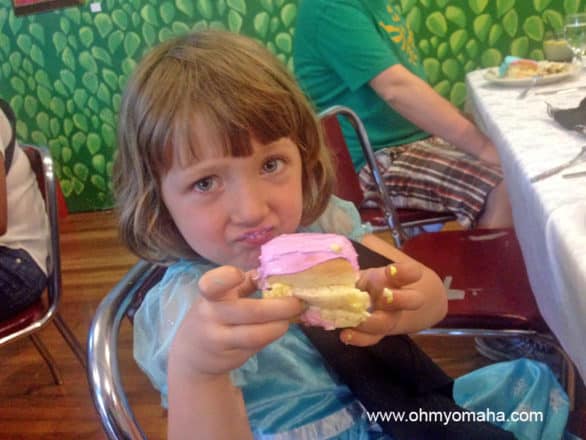 The look says it all: “This is not cake but a chicken salad sandwich?? Why, Mommy, why?” The Apollon likes to play with food during a show.

Not all shows are suitable for all ages, so before buying a ticket for your whole crew, double check. This Alice show, though, is great for kids. My kids are 4 and 6 and enjoyed every minute of it (except for the sandwiches that looked like cakes and were not at all like cake).

My daughter has been pretending to be Dweedle Dee for four days now. So I guess you could say she liked it.

Meals are themed off the performance. They’re included with your ticket.

Since the show we attended was a riff off Alice and Wonderland, our food was wonderfully bizarre. 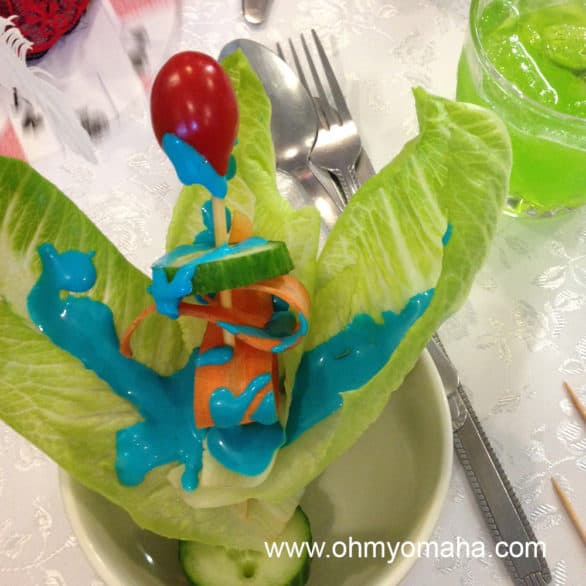 We had four courses for our meal, ending with a birthday cake. It was a birthday party, after all.

Drinks were extra. I had to order one of the specialty cocktails, just because. 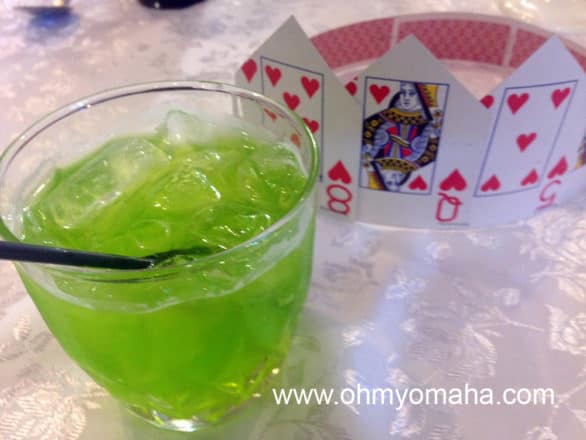 You try going to a dinner show alone with your kids. You’d order a Mad Hatter, too.

The prices were pretty reasonable – $3 for a glass of wine? Bottoms up!

The Apollon is along a charming stretch of Vinton Street in downtown Omaha.  The space itself is small and not set up like a typical theater. It’s a space for many uses.

A lot of the art on the walls not only served as a set for the show – it doubled as a gallery space. We, the audience, were asked to create some art for the wall during the show. However, working artists also have some work on the walls that could be purchased.

Besides interactive theater, the space hosts improv shows, Drink and Draw nights, and there’s a little art supply store. We bought some coloring books after the show from the store, and the kids were happy to use them to collect autographs from the cast. They also host free art classes occasionally, which you can keep tabs on here.

“A Very Important Date: The Untold Story of the White Rabbit” – Runs through July 2.

Parking: Park on the street, and if you can’t find a spot, there’s overflow parking at the Supermercado Nuestra Familia, 1826 Vinton St.