It’s pretty easy to get stuck in a rut as parents. To recharge yourself, you need a break. Sometimes, it has to be a quick one. Mr. Wonderful and I took a kid-free overnight trip to Sioux City, Iowa. It was a lot of food, drink, comedy and music. Sounds good, right? 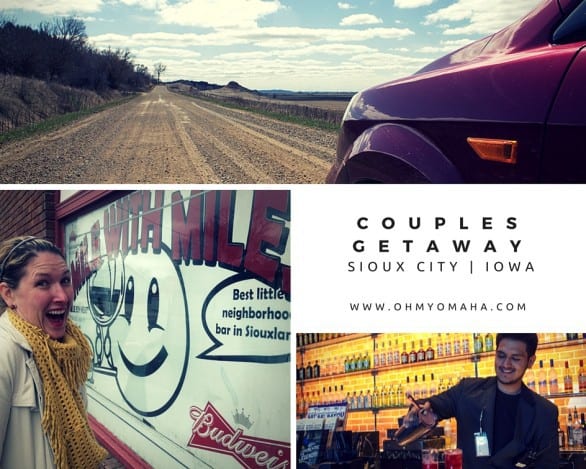 Sioux City was picked because it was just far enough to feel like a getaway – about an hour and a half north of Omaha. Our stay was coordinated by the Sioux City Visitor & Convention Bureau and the Hard Rock Hotel & Casino.

The second reason I wanted to go there was the entertainment. I was looking for a good concert or show to catch within two hours of Omaha. And at the Hard Rock I found a goodie: Jon Lovitz! Yes!

So, we dropped the kids off with my brother and his family and off we went.

We arrived in Sioux City around lunch time, so I was determined to try one of the tavern sandwiches I’d read about.

Taverns are a loose meat sandwich, akin to the sloppy joe without the sloppy part (no tomato). We headed straight for Miles Inn, the bar recommended by several friends (and winner of the Sioux City Journal tavern showdown a few years ago). 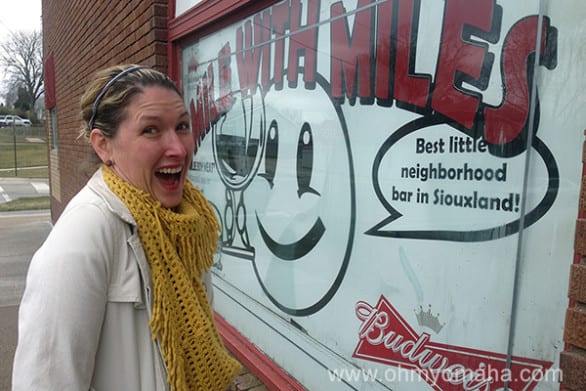 It was March Madness time so the place was packed and full of lively regulars. We got our cheap taverns ($3.25 each), and two schooners because…when in Rome.

The schooners of domestic beer were only $3.25 and by all appearances, the one only glass beer is served in. Bottoms up! 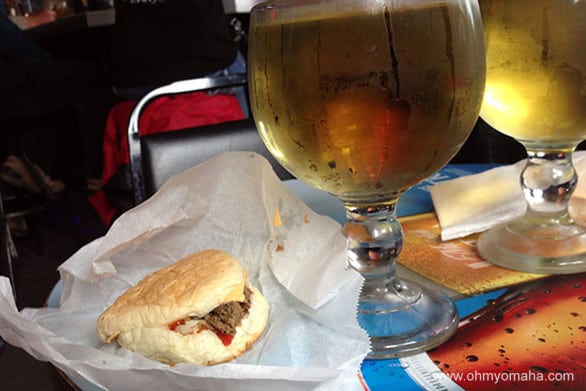 They’re on to something up in Sioux City. A tavern pairs well with cold beer in a schooner.

The taverns there had American cheese added and were quite peppery. I liked it, but it wasn’t a favorite of my husband’s.

We were still hungry, so we drove down the street to another recommended Sioux City original: Tastee Inn & Out. 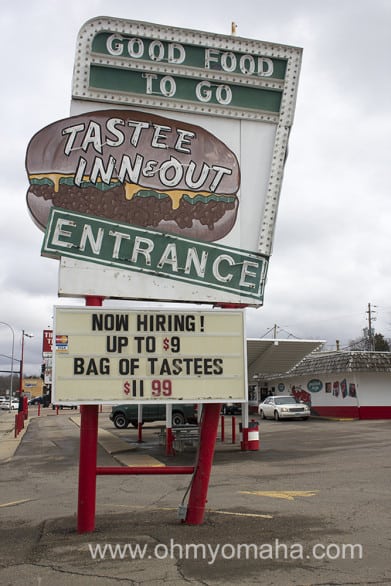 An iconic sign in front of Tastee Inn & Out in Sioux City.

There, we ordered their famous tastee sandwich (a tavern, but without the cheese) and the onion fries and dip. 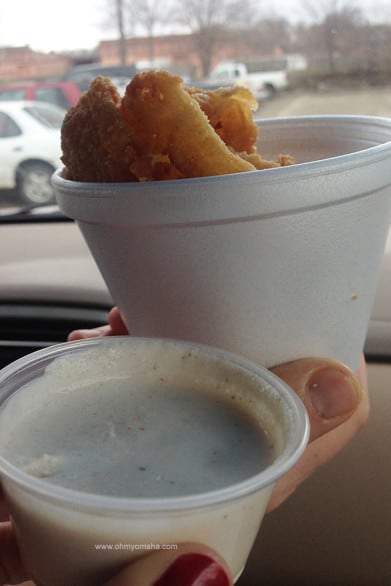 Onion fries in a cup.

Tastee is a drive-thru, so we pulled into the parking lot to eat and compare the two taverns.

We headed to downtown Sioux City next. The plan was to walk around but it was a colder day than anticipated. So, we planned two stops: The Sioux City Public Museum and Jackson Street Brewing. The Sioux City Art Museum is super nearby and if we had another hour and a bit more sunshine, we would’ve walked down there too.

The Sioux City Public Museum is a free attraction and worth visiting with or without kids. 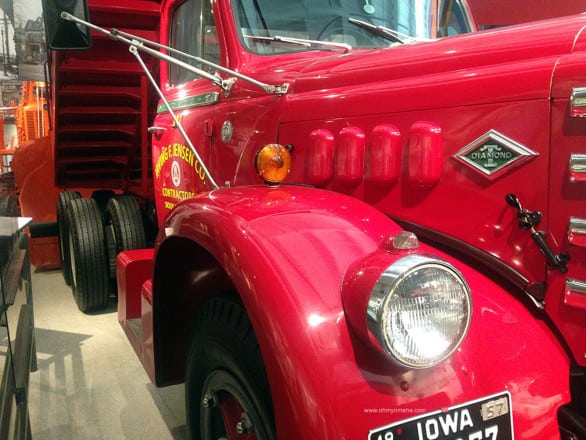 Plan to spend about an hour checking out exhibits at the Sioux City Public Museum, as well as 12 minutes watching the intro video.

They have a 12-minute movie that gives a good account of the city’s origin and features a neat immersive experience with lighting and projections around the room synced with the movie.

Afterward, you could spend about an hour walking around the colorful museum. There is a lot of interactive areas that kids will like.

A block from the museum is the new Jackson Brewing Company, which opened July 2015.

We picked out four beers to sample in a flight. 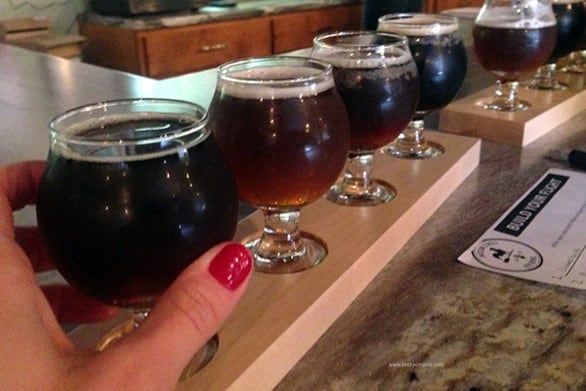 You choose the four beers to sample on a beer flight at Jackson Street Brewing Co.

Flights start at $8.50 and go up if you get high alcohol content beers. Of the four I tried, the maibock was my favorite.

We talked with the bartender and two locals while we were there and got the lowdown on breakfast spots for the next day. Super friendly people.

We checked into the Hard Rock Hotel & Casino, located within walking distance of the brewery and museums mentioned above.

The hotel has a music theme (obviously) that’s goal is to make you feel like a rock star. To that end, once you check in, you get a complimentary drink. 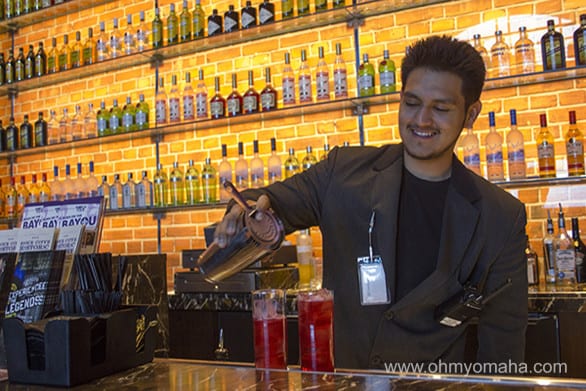 You get the choice of a beer or house cocktail at check-in at the Hard Rock Hotel & Casino Sioux City.

If you’re not ready to hit the ground running rock star-style, you can get a drink ticket for later.

We settled into our room – again, feeling all rock star with the décor and music playing in your room as you enter. The exposed brick in the rooms creates a great look when paired with modern touches and concert posters. 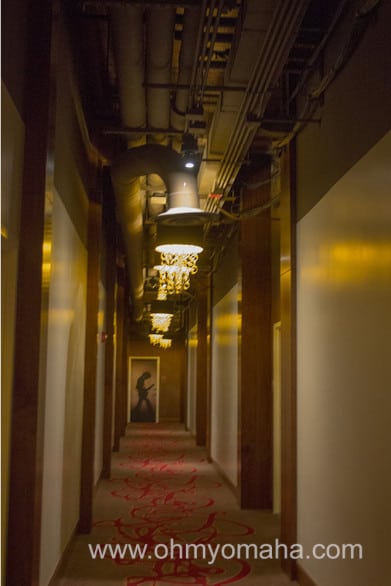 I kinda wished we were in the Prince room at the end of the hall. Check out that door. There’s always next time.

Then we headed downstairs for dinner, with a short stop at the casino. I’m not a gambler, so not a lot of time or money was spent there. If you’re the same, you can easily spend your hotel stay without entering the casino…unless you’re going to show there, then you’ll have to walk through the casino to get to Anthem, the concert venue. 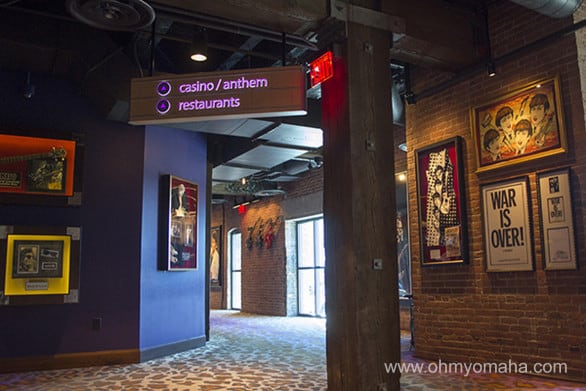 The hall connecting the hotel to the casino and restaurants is lined with music memorabilia.

You have a couple dinner options at the hotel, but we wanted a date night experience and had made reservations at Main + Abbey. The restaurant is ranked No. 1 on Trip Adviser, and perusing the gastropub’s menu, it seemed like mine kind of place.

Rather than order entrees, the two of us split several appetizers and order drinks. Wondering what to order? The pierogies were so good, and the poitine while heavy, was very flavorful. And if you’re an Instagrammy kind of person, order the pretzel appetizer – you’ll want to take pictures of it for sure.

We had complimentary tickets to Jon Lovitz’s second show, and were invited to a meet & greet with him. It was the very definition of meet & greet – we met him, greeted him, posed for a picture and moved on. 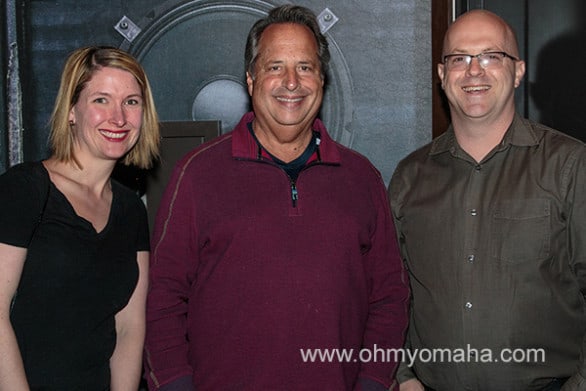 Funny. The only photo I took with my husband on the trip includes Jon Lovitz.

The show was at Anthem within the casino part of the hotel. From the outside, it looks deceptively small, but this pace can fit more than 900 people. There’s a bar inside Anthem to grab drinks before the show starts.

Lovitz had an opener, and then he entertained the crowd. It was a fun night, and the best part was that we didn’t have to head to our car to get back to our hotel. It was great to leave the show, walk to the hotel part of the building and be back in the room in no time.

Breakfast the next day was up in the air until we had that chat at Jackson Street Brewing. They were quick to recommend the Hard Rock’s buffet, but we asked for where locals would go and they steered us to what they referred to as a great greasy spoon: Horizon Family Restaurant.

So Horizon is was for us. Outward appearances weren’t much, but with a packed parking lot, we figured it couldn’t be too bad. 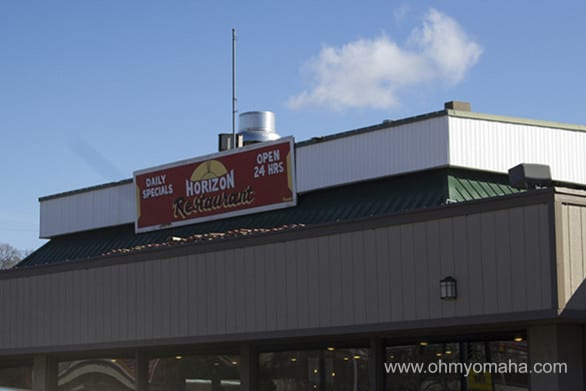 Not much of an exterior, Horizon Restaurant is the greasy spoon you seek after a late night.

It’s a no-frills diner that was hopping on the Sunday we went. Offerings were pretty typical for diners, and the coffee was great.

To burn off the big breakfast, we headed to Stone State Park located within Sioux City’s city limits. Our timing wasn’t great since everything was leafless from winter, and being Sunday, the Dorothy Picaut Nature Center wasn’t open (it’s open from 1 to 4 p.m. on Sundays). 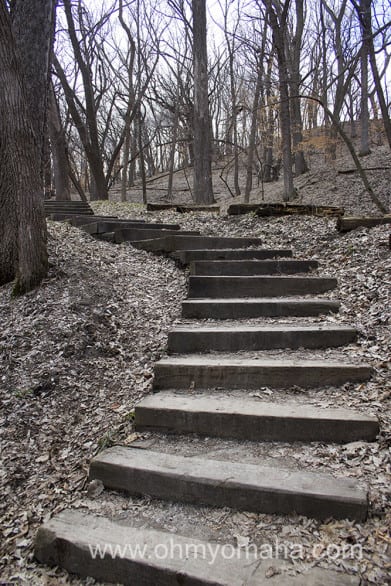 Still, we took a nice hike near the nature center and discovered a cool nature playscape. The kids would love this place! 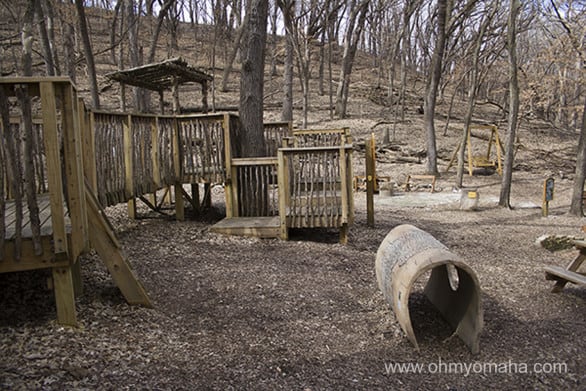 The park and nature center are FREE.

The short getaway over, we headed back to Omaha. Rather than take the quick route via Interstate 29, we drove along the Loess Hills Scenic Biway. If you have time, try it out, especially if you’re itching to take some pretty photos. 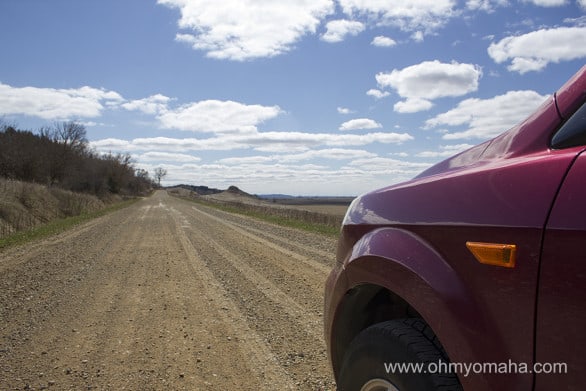 If time permits, always take the route with the dirt road.

We tried two of the scenic loops – Stagecoach Trail and Wilderness Trail.

It was picturesque in spite of the time of year. We resolved to drive it again when the scenery’s lusher – fall would be perfect. 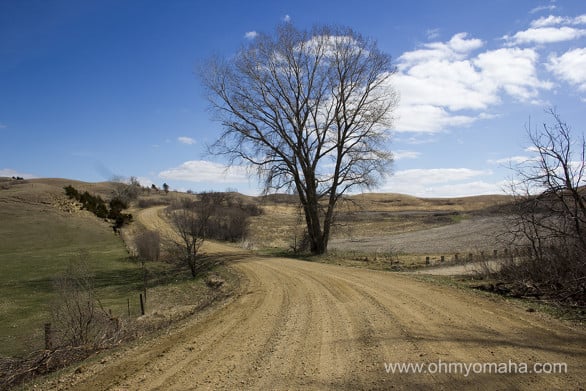 Fall would be a great time to drive the Loess Hill Scenic Biway, but that’s not to say the vistas are bad in early spring.

As a forever Saturday Night Live fan, super jealous! Glad you got the chance to sneak away with the hubs. Looked like a great trip.

We quoted SNL all night long. Yeah, that's the ticket.

I'd really like to go back in a different season. My kids would have regardless of the season, but I'd love to see it in the fall.

Sounds like a great time full of new food and drinks. Personally my favorite way to spend kid-free time.

Thanks, Cheryl! I agree. I plan whole trips around trying new places to eat and new drinks to try.