It started with a great review about a restaurant.

“Sisters Café is, at its base, a small-town cafe. That’s part of its charm and why it’s unusual menu — and the success of that menu — is even more notable.”

I made note of that. Who knows, maybe someday I’d be in Plattsmouth and need a recommendation. 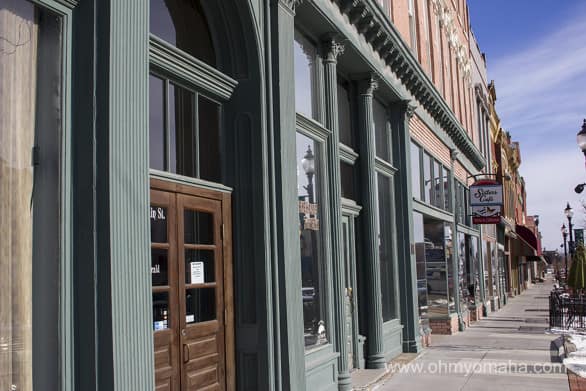 Then I read a year-in-review in another newspaper. There was that restaurant again!

“The best restaurant I reviewed this past year wasn’t in Lincoln. Instead, Sisters Café in downtown Plattsmouth was among those I enjoyed during my annual excursions out of town during July.”

Well then. Guess I should go there.

If you know me well, it’s not too crazy to think I’d make a special trip just for a restaurant. Those who know my family know it’s pretty much what we do. My parents drove to Sioux City once just for sausage.

So during the shortest sabbatical from full-time work ever, I found myself on a little road trip to Plattsmouth, expressly to eat at Sister Café. 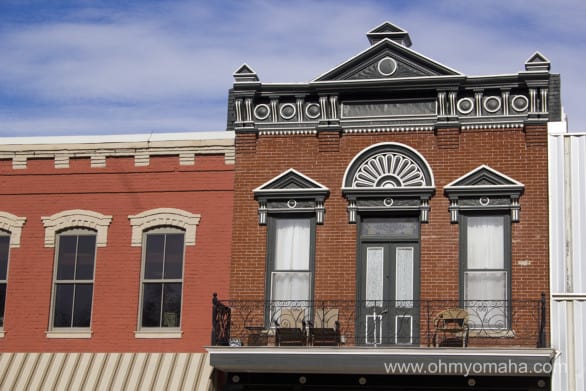 Go ahead, stare at the old buildings in Plattsmouth. They’re darling.

Plattsmouth is the county seat of Cass County, Neb., and about 20ish miles south of Omaha. Cass County is one of the earliest settled counties in the state of Nebraska, and also one of the largest counties with 15 towns. Plattsmouth was established as a ferrying point of the Missouri River in 1852, and the name comes from its location at the confluence of the Platte and Missouri rivers.

Want to see the confluence of the two rivers? Head to the site once visited by Lewis and Clark Expedition at the Schilling Wildlife Management Area in Plattsmouth.

With a population of little more than 6,500, it’s a small town, and one with the most charming Main Street I’ve come across in recent years. 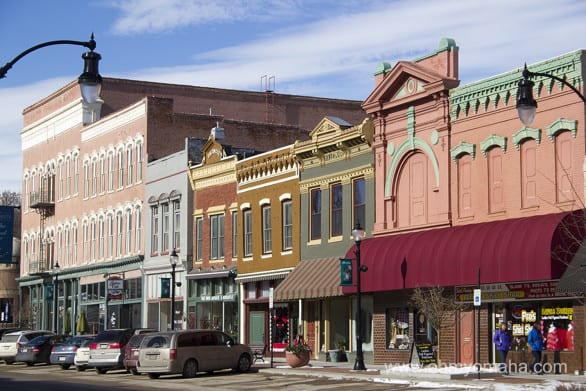 The colorful buildings on Main Street in Plattsmouth, Neb.

There’s also the Cass County Historical Society Museum, which I visited briefly. For a small fee, you can see a ton of interesting items from our state’s past. 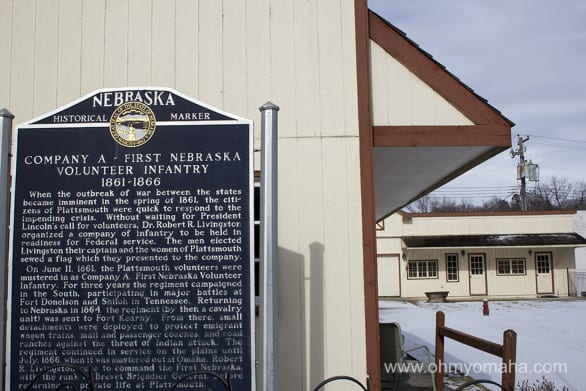 The historical marker by the Cass County Historical Society Museum.

There were a few hands-on things in the museum, but for the most part, it’s look, don’t touch. 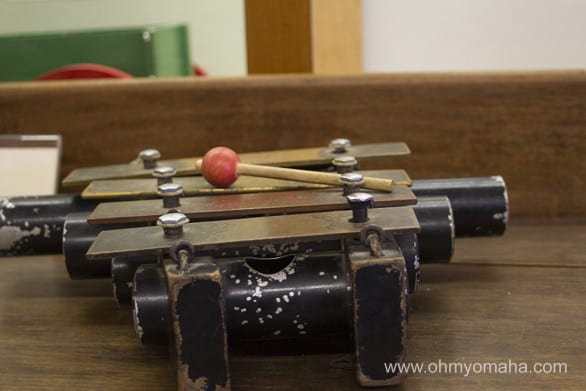 You can play this at the museum. Don’t be shy.

It’s small but don’t let it detour you if you have a remote interest in Nebraska history. And, from experience, these types of county museums actually are quite interesting to children. We took a tour of one in Franklin County, Iowa, and all the kids on our tour got a kick out of the old timey stuff, especially the toys, phones and clothing. 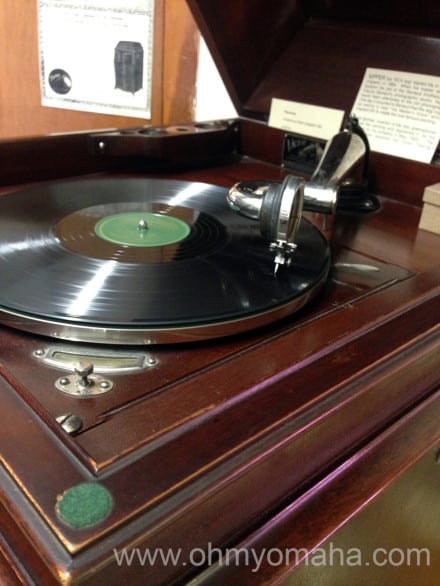 One of the volunteers at the museum started playing a record while I was there – now that’s how you add atmosphere to a museum.

It’s the same sort of museum here in Plattsmouth. If you visit, expect to spend less than an hour (unless you’re one of those types who has to read every. single. plaque). 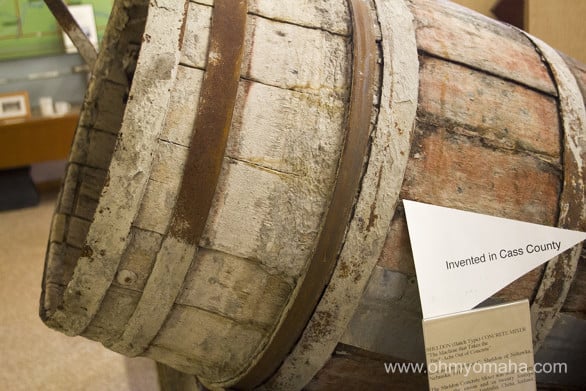 Scattered throughout the museum, you’ll see lots of items with connections to the county, some invented there, some that belonged to residents, etc.

One of the notable parks in Plattsmouth is Caboose Park with – guess! – a caboose. It’s actually a 1913 Burlington Caboose. The park also has the Cook Log Cabin, an old-time threshing machine and tractor. I didn’t actually see it, so I’m taking the county visitor’s guide’s word for it.

For me, the main draw was the Sisters Café, and it did live up to the hype. If you read the reviews, you know it’s both a Thai and a German restaurant. No fusion, the menus are totally separate.

I wish I had brought along Mr. Wonderful or some other relative who puts up with my spontaneous ideas so that I could’ve sampled some other dishes. I’m going back to try some German food next time.

As it was, I asked what the best thing on the Thai menu – crunchy chicken, they told me – and dined happily at the counter. It was so good. 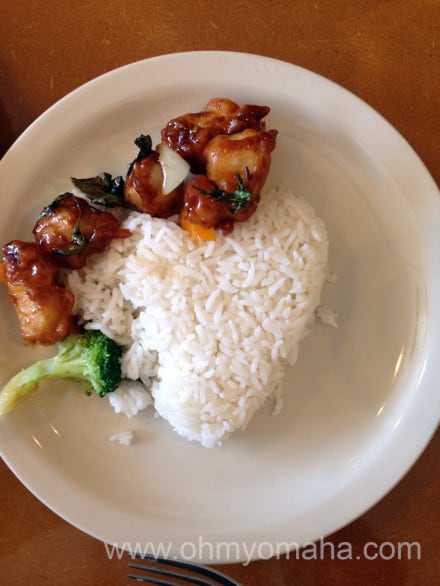 My lunch at Sisters Cafe in Plattsmouth, Neb. – Crunchy Chicken. Must remember: It’s impolite to lick the plate.

It started out with rice soup. It comes along with the lunchtime entree and it was so satisfying.

The rice soup that comes with the lunchtime entree at Sisters Cafe.

They also have a selection of German and southeast Asian beer, and wine.

And dessert. Which I regrettably didn’t order. Yelp reviews raved about the dessert. Figures.

Instead, I decided to get a sundae at a nearby soda fountain.

Because…how can you resist a soda fountain?

So, after pigging out at Sisters Café, I walked a block to River House Soda Fountain Café. The interior is pretty fun, and looking at all the dusty old stuff passed the time away until my sundae arrived. 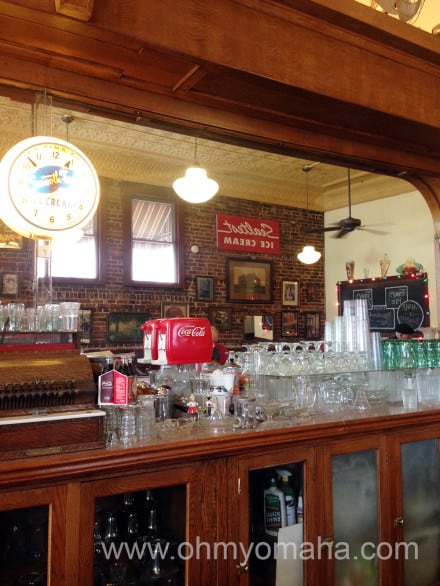 My view when I saddled up to the bar at the River House Soda Fountain Cafe.

Alas, I am spoiled by the ice cream shops in Omaha, and this sundae was, well, nothing special. Still, I can totally see my kids loving a visit here.

Kim’s note: I’ll update this when I get specific dates for some of the events. Just know that things like the Taste of Plattsmouth and the Harvest Festival do not last a month.

September – Harvest Festival, featuring parades, a carnival, car show and other fun competitions like corn eating contest and a water fight with the fire department.

I came across your article on Plattsmouth while online today. I own Wild Horse Antiques on Main St. Thought your article was great. Please mention this comment if you are in Wild Horse and receive 10% discount