To get a feel of the real Rapid City, you’ll want to head to the downtown area, particularly Main Street.

You’ll find antique stores, boutiques and plenty of dining options. There’s also a plaza that attracts kids like moths to a flame. Be sure to have a change of clothes on hand for the little ones. 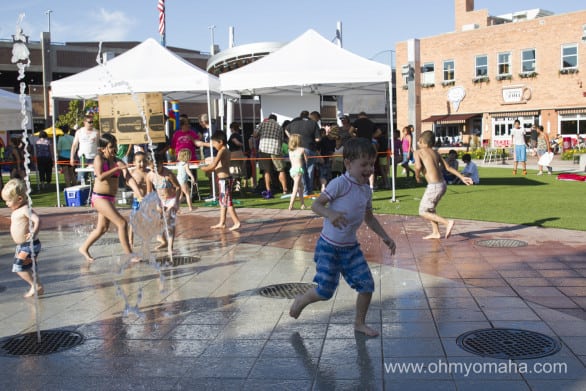 Kids will love playing in the plaza’s sprayground. There are shops around the plaza where you could grab a coffee, smoothie or ice cream to enjoy while you sit and watch the fun. The tents aren’t always there – we went on a Sunday night in the summer, there were some free activities during the event.

Our family was hungry when we rolled into town, so the fountains had to wait while we sought some good eats.

We were invited to have lunch at Firehouse Brewery Company Brew Pub, appropriately named since they brew their own beer and are housed in the former firehouse that dates back to 1915. It’s a cool looking place, and not surprisingly, the building is listed on the National Historic Register. 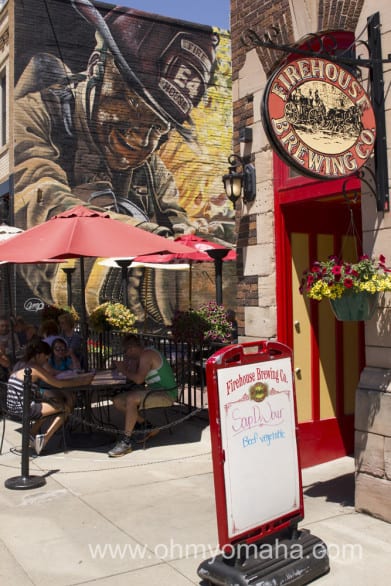 Plus, another historic note: It’s South Dakota’s first brew pub – how could I resist?

Firehouse Brewery Co. turned out to be a win for both parents and kids. Food was terrific and arrived promptly – so no impatient kids. 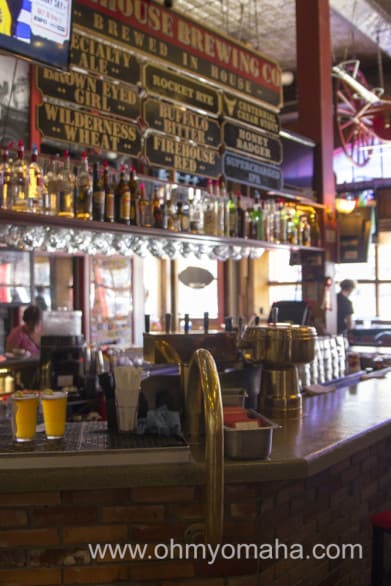 Saddle up to the bar and order one of the local brews.

It’s a great selection of house-made beer. Order by the pint or try a flight. 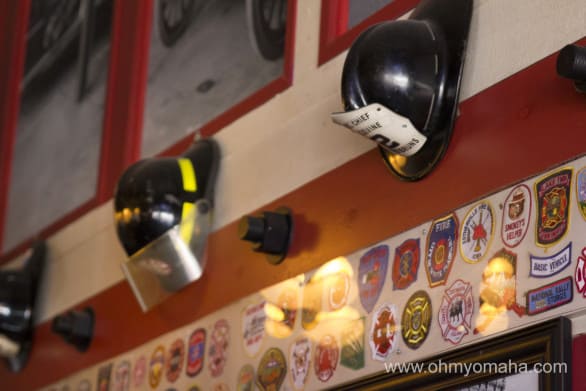 There’s a stage on the patio that also appealed to my daughter. If you time it right, you may catch an evening performance – musicians play Wednesdays through Saturday nights from May 20 to Sept. 5.

If it’s nice out, sit outdoors. Great, low-key atmosphere. Lots of families were seated there. I learned later that even if it isn’t nice out, the outdoor beer garden is heated. 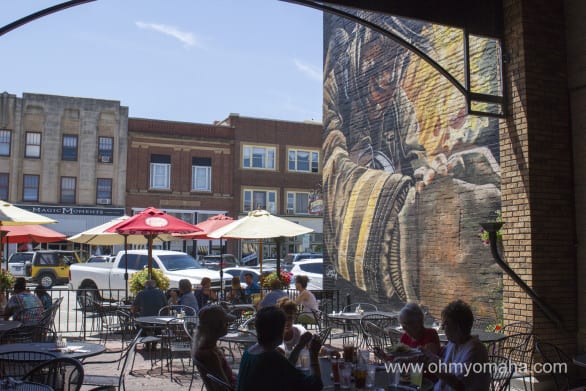 I loved this outdoor space at Firehouse Brewing Co. in Rapid City.

Our waitress, Tracy, had some great recommendations and we tried most of them and weren’t disappointed.

Appetizers: The popular dish Tracy recommended was the artichoke dip. We had to buck that trend and try the Firehouse Caps, a baked dish of portabella caps topped with cheese and green onions. It had a kick to it, and being mushrooms, we couldn’t get the kids to even try a taste. Oh well, more for us to eat.

Beer: The beer list is long, and rather than guess what is the best of the best, we asked our waitress for the most popular brews and went with those. 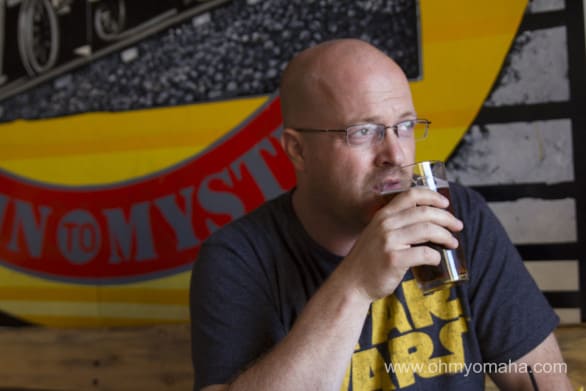 The look of a man who just had his first sip of a beer after a long drive in a car.

Mr. Wonderful ordered the Firehouse Red, and I went with Honey Badger, a dark beer with a hint of sweetness.

If you like brown ales, that one is darn good. I recommend it. 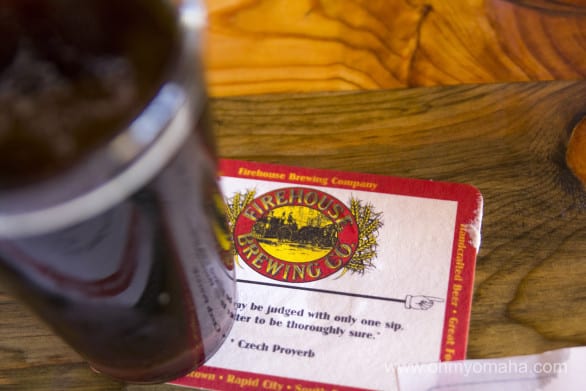 Kids food: There is the standard hamburger, mac n cheese and chicken tender options (which Mooch tried and devoured). I liked that they had mini versions of some of their popular sandwiches – Farley ordered a BBQ pulled pork sandwich. All come with fries. 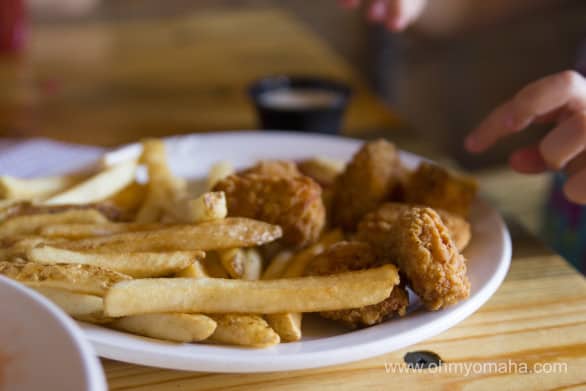 Try getting a 3-year-old to wait to grab her chicken tenders for a photo.

Entrees: As you can imagine, there’s the standard brew-pub fare of sandwiches, barbecue and some hearty burgers. Tracy said the burgers were all popular dishes, but had a few additional recommendations. 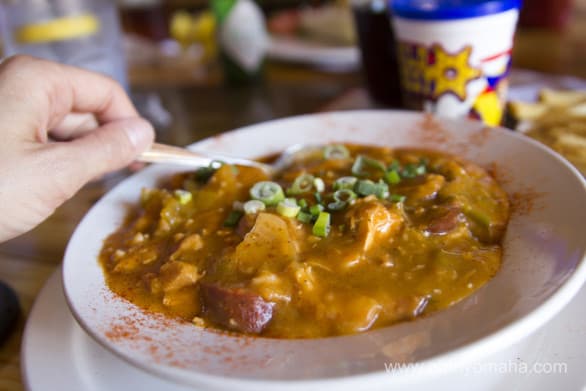 No burgers for me. I tried the Firehouse Gumbo.

I tried the gumbo, which was a Rachel Ray-pick when she visited. It was a filling, spicy dish that went oh-so-well with my beer (Honey Badger).

Mr. Wonderful ordered the fish tacos. I tried a bite and had to hand it to him that he picked a winner. 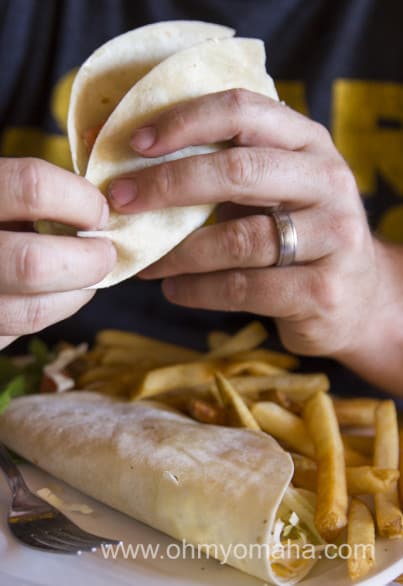 One of the most satisfying entrees at Firehouse Brewing Co. were the fish tacos.

Dessert: We were really tempted to get the cookie dessert, but who are we kidding, this family is a bunch of chocolate addicts. We took Tracy’s advice and got the Stop Drop and Roll. 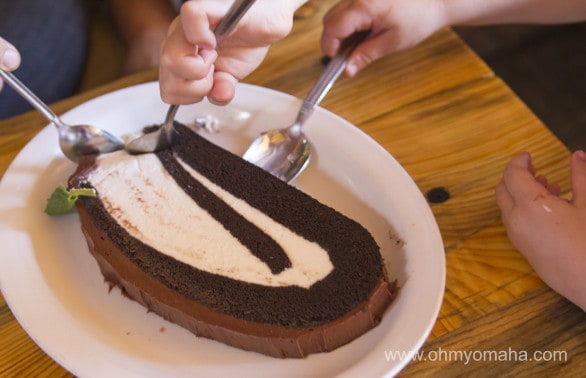 Dessert was Stop Drop And Roll, and it was big enough to share. Think of it as a fancy Ho Ho.

It’s plenty large to share, even for a family of four. I’d liken it to the best homemade Ho Ho you’ve ever had.

So is it good for kids? 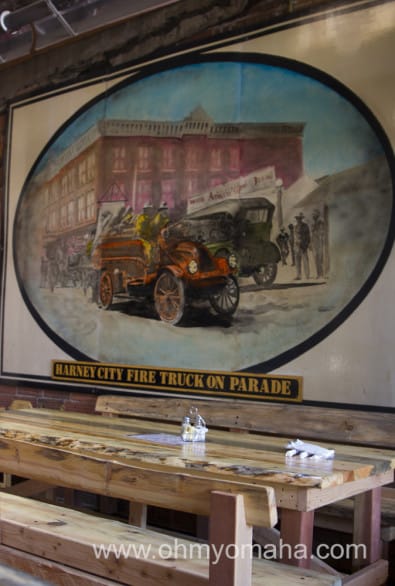 The outdoor seating area has tables large enough to fit a big group (or big family).

Cost: For a meal for four, including two beers, an appetizer and a dessert, expect to pay about $60-$65. It was a pretty fair price for all that you get.

Tip: If you’re not traveling with kids (and you’re 21+), you can take a FREE tour during the summer months. They are at 1, 3, 5 and 7 p.m. daily leaving next door to the restaurant.

Disclaimer: Firehouse Brewing Co. provided a complimentary meal for my family so that I could write about the experience during my stay in Rapid City.

Planning a trip to South Dakota and Western Nebraska? I wrote a series of posts and reviews of kid-friendly attractions, lodging and a photo-heavy trip recap. Check them out:

Canoeing the Niobrara River with Kids