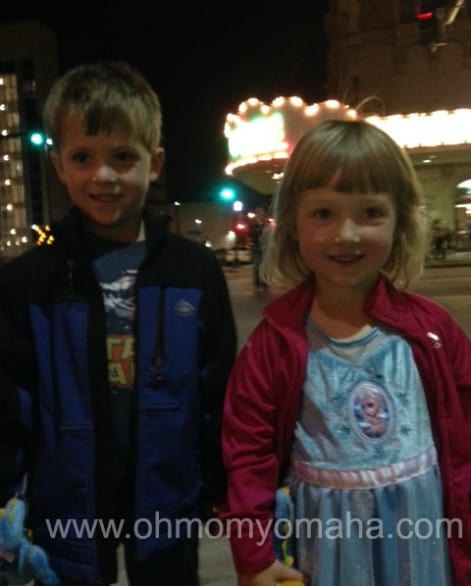 Happy faces at The Rose. Full disclosure: It took 10 tries to get them both looking (kinda) and smiling at the camera.

The Rose offers different activities on the opening night of each show in their season. There were oversized chess sets in the lobby – you’ll understand why after seeing the show. They also handed out adorable dragon dolls to kids after the show. Both kids loved their! 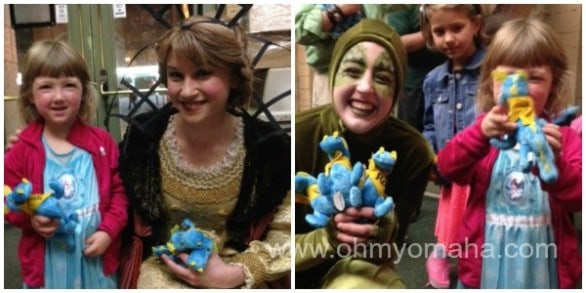 Mooch was excited to get her picture with one-half of the dragon (Jamie Fields) and a “queen” (Lady Kendal played by Caulene Hudson).

“The Reluctant Dragon” is about Glaston (played byAlia Sedlacek), a young boy who dreams of having dangerous and daring dragon encounters like the heroes in his books. The set is not elaborate, but instead, a collection of colorful and charming pieces with a backdrop that’s like a book. 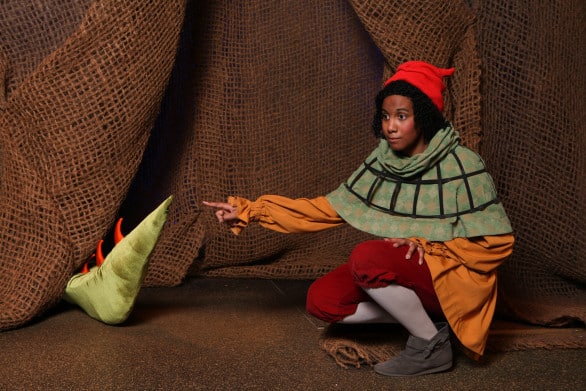 Glaston, played by Alia Sedlacek, and a dragon? Photo courtesy The Rose

Glaston meets a dragon – a friendly one, it turns out. While the two actors maneuvering the gigantic dragon did a fine job making him jolly and about as non-threatening as a dragon who likes tea parties can be, he still scared Mooch a tad at the beginning. Older kids seemed to like him instantly.

The play is based on a much older work and set in England centuries ago – so expect some old English dialogue. It seemed to be way over Mooch’s head, but Farley, at age 5, kept up with it.

The costumes were well done and most impressive was the dragon costume.

The biggest hit of the night was the projection of “brother dragon” on the ceiling. It got a “Whoa!” out of Farley.

Don’t forget, after each show, cast members hold a Q&A from the stage, as well as sign autographs on the second floor..

There is quite a bit to appeal to kids – a dragon who likes silly and unexpected silly things like watercolors and poetry; a brave knight; funny townspeople; and of course, a brave, bookish boy.

However, it is one of those kinds of plays that’s also harder to follow for youngsters. The old English is tough, and the dragon is a smart fella, so he uses some rather large words. It’s recommended for 5 and older. Mooch, being 3, lost interest midway through and had to spend some time in the Wiggle Room. Once she came back into the hall, she sat fine for the rest of the 60-minute show.

I liked the message it gave kids: Don’t judge a book by its cover.

I also found some of the cast to be pretty funny, particularly Lauren Krupski as the loud, quick-to-judge tavern owner. 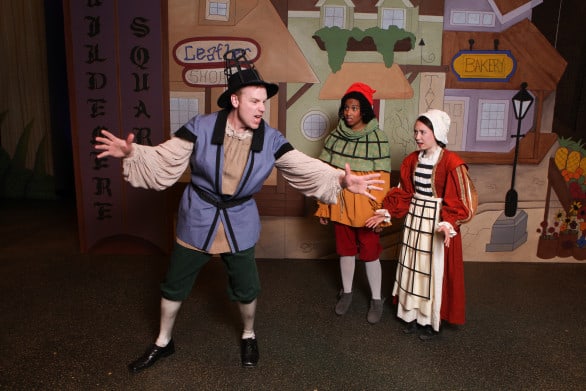 Matthew Pyle as Woolchester telling an exaggerated encounter with a dragon while Alia Sedlacek as Glaston and Amy Bahr as Darby listen. Photo courtesy The Rose

Glaston is a boy who dreams of having dangerous and daring dragon encounters like the brave heroes in his books. But when bad things start happening in the town, the villagers fear that a real dragon may be terrorizing the countryside! When Glaston boldly offers to seek out the fearful beast, he is surprised to find a gentle kindred spirit. What will they do when the famed dragon-slayer, St. George, arrives to rid the village of its dragon problem? 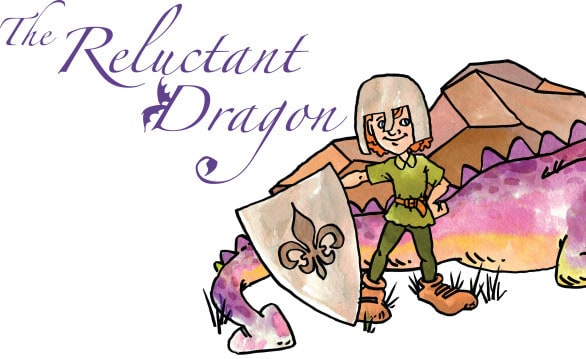 When: Through April 4, with performances Fridays at 7 p.m., Saturdays at 2 and 5 p.m., and Sundays at 2 p.m. There will be an additional performance Sunday, March 29, at 5 p.m. The 2 p.m. performance on Saturday, March 28, will be interpreted for the deaf and hard of hearing.

Disclosure: I was provided complimentary tickets to attend the show in order to review it. All thoughts and opinions are my own.

I'll tell my wife about this!

It's a cute show, and the dragon costume really is a cool design to see!