Omaha has a gem of a cinema and I’d wager to bet about 95% of my family hasn’t been there.

Have you been there?

At this point, you’ll say you have and point out that it’s actual Film Streams at Ruth Sokolof Theater. Touche.

This NoDo two-screen cinema open in 2007 . It’s a nonprofit organization that screens first-run films , as well as classics, pop culture goodies, documentaries, foreign films, shorts, and a bunch of movies to make a film student giddy and the average moviegoer scratch her head. 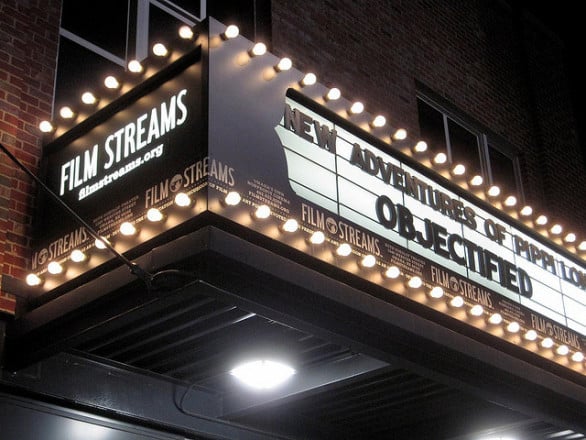 I’ve loved having the chance to see spectacular independent movies there that don’t make it to the bigger chain theaters (and some that eventually do, like “Slumdog Millionaire”), as well as repertory films. We went with a large group to a screening of “Big Lebowski” there. Mr. Wonderful and I don’t get too many date nights at a movie theater these days, but this is a great little place to go to – they have beer at the box office.

I’m slowly trying to turn my kids into film snobs.

Film Streams has a series called Forever Young Family and Children Series. From the website, the series is intended to “introduce young movie lovers to contemporary independent film and the rich history of cinema through playful and substantive programming.” So while that sounds artsy, keep in mind that they included a run of Looney Tunes shorts recently.

A few weeks ago, we took the kids to see “Song of the Sea.” Three generations saw it together, and we all enjoyed it.The movie has stuck with us ever since. My daughter asks me to play the soundtrack in the car, and I’ve made up lyrics to the main theme song so I can sing it to her at bedtime. We watched the director’s earlier movie, “Secret of Kells,” after seeing “Song of the Sea,” and that movie led my 5-year-old son into an interesting phase of bookmaking.

So what I’m saying is they show some pretty inspiring stuff. Awesome stuff kids should know about.

Films in this series have matinee screenings on Saturdays, Sundays, and Thursdays, and kids 12 and under get in for just $2.50. Booster seats are available at the concession stand.

What’s coming up in the series

A French animated film from 1980. “..the film is an allegorical story of repression and rebellion based on a Hans Christian Anderson story. In a magical kingdom, an evil king pines for the shepherdess in his favorite painting, though the girl is united in love with a chimneysweep in a neighboring picture. The two figures burst to life to pursue their love. On the run from the king, their only ally is the many-colored mockingbird, the only being in the land not under the wicked ruler’s spell.”

A fantastic voyage to the microscopic world of insects, the 1996 documentary used ingenious techniques to zoom in a drama that’s happening all around, unbeknownst to us.

Your turn: What movie have you seen at Film Streams?