How many of you have seen “Radio City Christmas Spectacular starring The Rockettes”? It opened on Thursday, and I attended with three generations of my family: My dad, my sister and Farley. 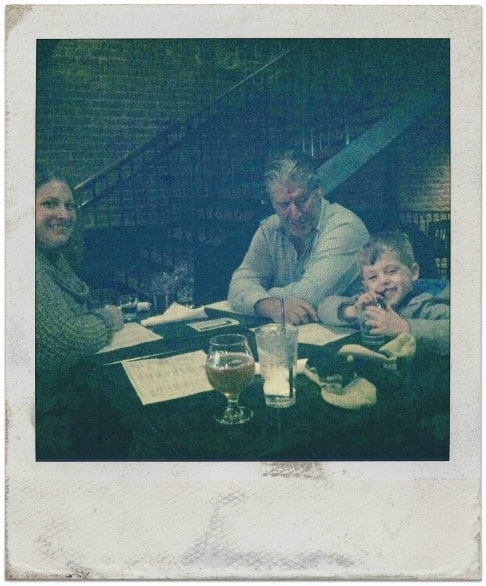 My dates to “Radio City Christmas Spectacular” at a pre-show dinner at Wilson & Washburn.

(I was there first and foremost for work, but a nice perk of work is being able to attend things like this after my job is done. Disclaimer: I work for Omaha Performing Arts, the nonprofit organization presenting “Christmas Spectacular”).

Original plans called for Mr. Wonderful and Mooch to join us but Mooch has some mystery illness that’s kept her at home (and binging on “Curious George” on Netflix).

The Rockettes are the draw of this show, and for good reason. You have not seen such precise dancing, such flawless execution. 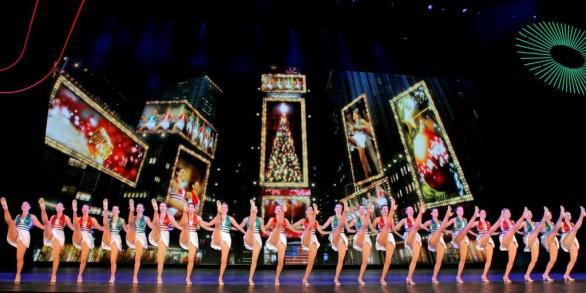 You’ll also see Santa in several scenes, and he’s a lot of fun, especially the scene “Magic Is There,” when it’s explained how he can seemingly be in many places at once.

There are beautiful costumes – as you can imagine, the Rockettes have quite a few stunning outfits. The sparkly number at the end will impress. There are also fun costumes, especially the animals in “The Nutcracker” scene. Kids love the dancing animals in that scene. 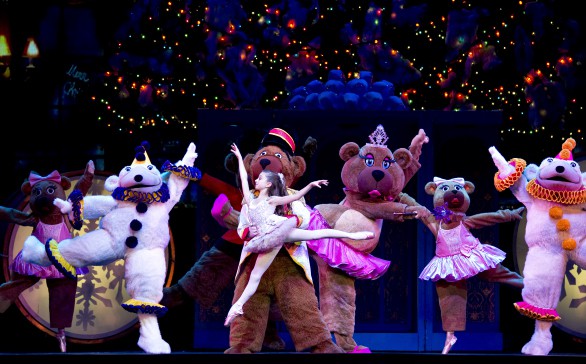 There’s a playful look at “The Nutcracker” in the “Radio City Christmas Spectacular.”

There are six singers in the show. I’ll be honest, they are my least favorite part of the show. They’re all great singers, they’re just less exciting in comparison to 18 women high kicking and tap dancing and making it look easy.

It’s a 90-minute show with intermission, so you can expect asking your kid to hold it for about 45 minutes on either side of the show. You do not want to get up and leave during the performance (at different times of the show, cast members are in the aisle briefly).

It’s great for kids! You know your kids best and their tolerance of live theater, but I was about to bring a 3-year-old so if you ask me, a well-rested preschooler can handle this show. Farley is a few days shy of 5 and he sat through the 7:30 p.m. show with no problem. It’s only 90 minutes long with intermission in there to stretch your legs a bit.

A preschooler’s favorite scenes? Farley’s favorite was the “Wooden Soldiers” bit, which is a feat of precision you have to see. He’ll try to act out the end if you ask him. A 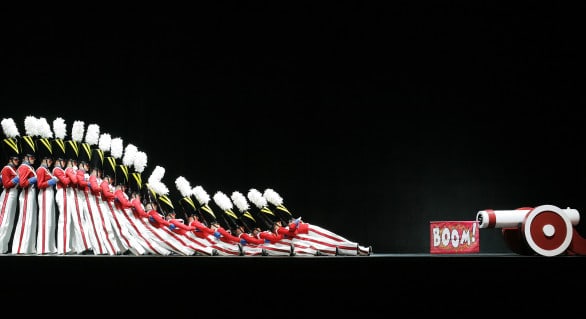 lso, see what I wrote below about “New York At Christmas.” You put a moving bus in a show, this kid is going to sit up and take note.

I’d seen this show in Branson two decades ago. As a teenager, I was not thrilled with it. As a mom watching her kid in awe of the hundreds of Santas on stage, I loved the experience. It was magical seeing it all over again. Plus, I really could appreciate the talent of the Rockettes.

It is meant for young and old, and to demonstrate that I give you “New York At Christmas”: Farley loved the scene because it had a moving, life-size double-decker bus – my dad was equally impressed with that scene, more so because of the 50-foot LED screen that made the bus ride through New York look incredibly realistic.

Well, it’s kind of a celebration of Christmas without a storyline. There is a brief story that covers a few scenes in the second act, which is about two boys trying to find their sister a present and Santa helps them out by sending them to his workshop (those scenes are where you’ll see the fun 100 Santas number and the rag doll dance).

“The Living Nativity” is one of the final scenes of the show.

You get both the secular and religious sides of Christmas in the show. Many people love the beautiful “Living Nativity” scene. But you also get Santa and his reindeer.

Tickets: There are tickets still available to it! There are 34 performances at the Orpheum Theater through Nov. 30 – if you’ve been thinking of going, you haven’t missed the bus. Get tickets at TicketOmaha.com.

More from Oh My! Omaha

10 Omaha Theater Productions Not To Miss

I absolutely loved this show! It brought Christmas magic to life!

Right? It captured the spirit of Christmas.

So many great shows in Omaha right now. Wish I had an endless supply of cash :) This former children's theatre major would be at the theatre every. single. night.

In this city, you very well could see a different production every night! You'd be broke, but highly entertained.

Don't miss this...even if you're not a Rockettes fan, you will be. I promise!

Thank you for the endorsement! I'm glad you were able to go to the show on Thursday!

the Rockettes are amazing!! It's definitely a show you do NOT want to miss!!

That looks really fun. We just went to see A Wrinkle in Time this weekend. Mica has read the playbook 4 times. He really gets into performances of any kind!

I guess he really liked the show if he's read the playbook that much! He's really lucky to go to great shows with you.