I don’t want to bring my children inside a movie theater either. It’s too nice out. It costs too much.

What if it’s a crummy day outside, and it didn’t have to cost so much? 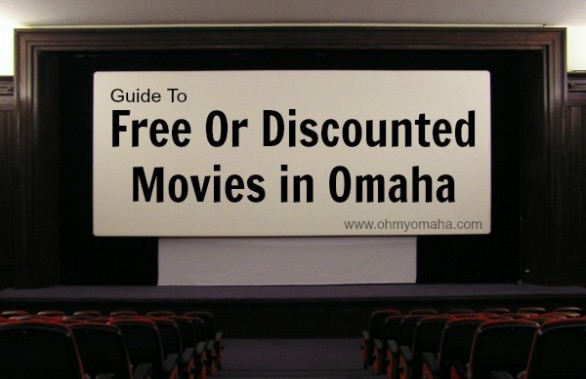 Don’t pay full price for a movie ever again, especially if you’re bringing a child who will want to leave the theater at least three times before the credits (reasons, in no particular order, will include potty break, exercise break, hall patrolling, scream break, nap time).

Here’s a rundown of Omaha movie theaters offering discounts – and what day to get them:

Cheap Or Discounted Movies In Omaha

Film Streams at Ruth Sokolof Theater – Let’s start with this nonprofit cinema because you know they’re going to curate quality stuff you and your kid will enjoy in the  Forever Young Children’s Series. Most films in the series have afternoon matinees on Saturday, Sunday, and Thursday, and kids’ tickets are always just $2.50. Some shows are quite old and from our childhood, others are fairly recent. Series info

Aksarben Cinema – See the newest blockbuster at locally-owned Aksarben Cinema and pay only $5 all day every Tuesday plus concession deals. No catches. Theater website

Marcus Theatres holds Flick or Treat during the month of October at participating locations. The deal: Kid-friendly “scary” movies are shown at 10 a.m. Fridays, Saturdays and Sundays with admission being $2, and concession deals. The chain also holds a kid-friendly movie series in the winter (typically February through March). Tip: You can get FREE tickets to the shows by participating agents at American Family Insurance.

Alamo Drafthouse – Alamo Drafthouse, offered Kids Camp in 2017; no dates set for 2018. You choose your ticket price, $1-$3-$5, and buy your tickets online to reserve your seats in advance. 100% of ticket sales are donated to local nonprofits. Note: Alamo Drafthouse has an age policy, so these shows are for children ages 3 and older.

If you’re members of Omaha’s Henry Doorly Zoo & Aquarium, tickets to the IMAX theater are always FREE. Here’s a list of what’s playing and when.

Public Libraries – There’s a good chance your closest library be showing a FREE movie sometime this month (though, not all screenings are for all-ages). Check the online calendar for upcoming movies at Omaha Public Libraries. Some branches even throw in some popcorn to boot. Not in Omaha? Check your local library’s schedule, I bet there’s a movie on it.

Film Streams at Ruth Sokolof Theater – This is a great deal for students: The first Monday of every month is Student Night— all showtimes FREE with a valid school ID.

Summer is prime time for FREE movies in Omaha. (see the proof)

Below is a list of some of your local options:

Music & Movies in the Bluffs

Unique Places To Watch a Movie

Nebraska State Parks also are interesting places you may catch a FREE movie screening in the summer (you’ll have to pay park admission and since they’ll be shown at night, you’re probably paying a tent camping or cabin fee…). These movies aren’t often advertised online, so be on the lookout the next time you’re a a park to see if there’s a flyer listing movies. I’ve seen movie screenings promoted at Platte River State Park, for instance.

Your turn: Where’s the best place to see a movie in Omaha with young children?

Thanks to my father who informed me abhout this web site, this web ssite is actually remarkable.