A few weeks ago, I wrote a bit of a rant/appeal for help – my very own Little Free Library (the one with the Alpha Bits walls and sad paint job) had been faring poorly. Books had been taken – Yeah! People are using it! – but not being returned or replaced. And the glass door cover had disappeared, leaving the measly remainder of books exposed to the elements.

Jay from Minnesota (find his blog here) came across my tweet about the post, and offered some kind words of encouragement. Then he offered to send a sign to increase awareness of the “one book only” policy.

That’s pretty nice of him, right?

Jay, (aka @LibraryofJustice) also sent a huge box full of books, and comic books, because that’s his thing. 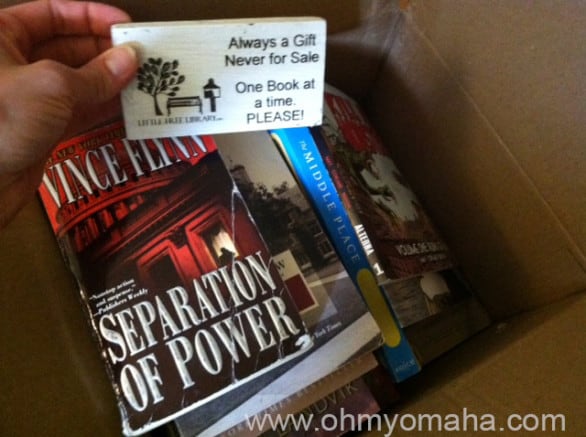 Library of Justice to the rescue with a box of literary goodies.

I was surprised by his thoughtfulness – these were exemplary books in all genres. I wanted to keep more than half, but I resisted.

My son, Farley, did not.

There was one graphic novel that caught his eye. He took it right away and it’s now his possession. 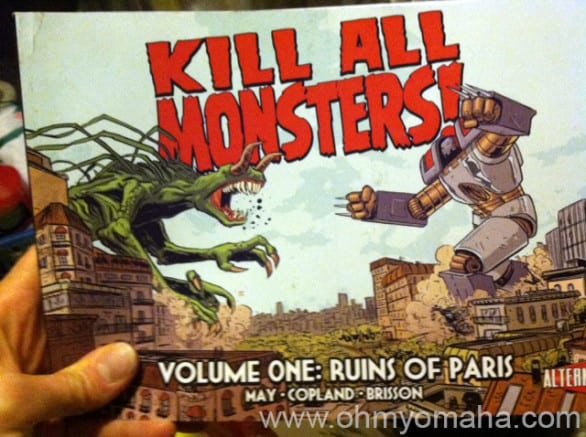 If you know me at all, you’re probably amused that my son’s first graphic novel is “Kill All Monsters!” Even the granola mom’s kid loves this stuff.

I should explain few things. 1) He’s watched the Beastie Boys’ “Intergalactic Planetary” music video about a hundred times too many.

2) My family has a Paris obsession. Long story.

Mr. Wonderful could not say no to him after seeing the cover practically screamed Farley’s name. Monsters! Robots! Paris!

The next day, I tweeted this collage of Farley devouring this book every chance he got. 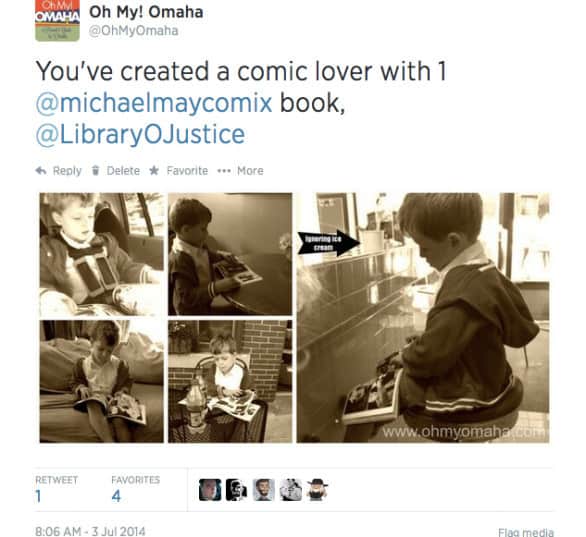 I tagged the Minnesota author, Michael May, for good measure.

May tagged the illustrator, Jason Copland.

And now Farley has an original illustration from the first graphic novel he ever loved.

When we dropped off the books from Library of Justice last week, I was so pleased to see that someone had taken the time to put up a plastic window where the old glass one once was! Plus, there were a lot of books in there – including some spiffy Christmas themed DIY books from the early ‘80s I’m guessing.

There’s a great variety of books in there now, so I hope, if you’re neighbors of mine, you’ll go visit the Metcalfe Park library soon.

Hi, Kim! This summer, my kids and I drove by Metcalfe Park on our way to somewhere else and HAD to stop and check out the library. It wasn't on its best day, so we came back another time with some books from our little free library to share. (We're on 44th and Poppleton, if you want to check us out.) I'm sure having it in a public location can be a bigger risk, but we're always glad to see a library and will continue to support it. Thanks for putting it up! Hope to see you around our library sometime. -Liz

PS. Thanks for the blog, too. As a fellow Omaha-based freelance editor and mom of two, I think I'll find many posts of interest.

A fellow little free library caretaker! Nice to "virtually" meet you - I will have to stop by your library sometime. I appreciate you helping restock it. Since this post, several people have donated a ton of books, so I'm better able to keep it stocked. It's tough, though! Thank you for you kind comment about the blog too!

Was glad to see the free library in Metcalfe park and I was sad to see its condition a few weeks ago when I was at the park. I had a feeling that it might get beat up in that location. Just an FYI, there is an awesome free library just up the hill on Franklin Street that is fully stocked and thriving. It was made by a guy within the Harrison-Metcalfe neighborhood. If the current one at the park doesn't work out, you can always direct people that way. Hope it turns around for you.

Thanks, Josh! It's up and down, some days I check and it's full, other days it's needing a refill. It's about what I expected for having it in a high traffic area. I know which library you're talking about - it has a great selection of books!

Glad to see your little free library is making a comeback! We're humbled by the mention, but just happy to help. :) And how cool is it that someone replaced the window? Sure, it's a temporary fix, but it's heartening to see people pitching in to support something they care so much about.

BTW, Michael and Jason are not just super talented guys, but super NICE guys. We're thrilled to know them and to be able to ring them in on our little free library schemes and garner new monster lovers/comic readers. ;)

Here's to the power of Twitter! Good luck and good reading to you and yours.

"... ring them in on our little free library schemes and garner new monster lovers/comic readers." I see you're using your powers for good instead of evil. Good reading to you, too! Thanks, Jay!

That's so cool! I never really understood the purpose of Twitter but it's cool to be able to connect to authors and illustrators in this way!

That's great that you Little Free Library is doing better!

We got our soon to be 9 year old a Hulk comic book, while we were on vacation. He told us that there was an inappropriate part. My husband looked, and it wasn't a big deal. I just told my son, "If you feel like it's too much than don't read it." It's kind of nice that he said what was too much for him. I know Barnes and Noble has an Indiana Jones Comic book. That one he has really enjoyed!

Thanks for the comic book tips! My little guy even gets worked up if a book has the word "stupid" in it, so I have to pick books carefully.