Editor’s note: My friends, Lisa and Tim, over at The Walking Tourists wrote today’s guest post. What started out as a short conversation about food trucks in Omaha led to their quest to try every Omaha food truck! It’s a work-in-progress, so below is just a sampling of what’s in our city. Follow The Walking Tourists if you want to get updates on this food truck quest.

My wife has a fascination with food trucks. We don’t really know why. She always wants to eat from a food truck when we travel to other cities.

A couple of years ago in Los Angeles, we saw a food truck shortly after our arrival. We planned to dine at one for lunch during the week we were there. We didn’t see another one at all. I’m sure we could have researched online and found a spot. But, I guess we didn’t think it was that big of a deal.

We actually ate at our first food truck in Omaha. Localmotive was located downtown during the Farmer’s Market one weekend. While it was food from a truck, it didn’t count as food truck dining to her because it wasn’t an out of town truck.

She got her wish last summer while we were in Milwaukee. Food trucks there meet up at a business office complex near downtown once a week. We researched it and managed to get Lisa her food truck lunch out of town.

Since then, it seems there’s been a food truck explosion in the United States (not due to my wife wanting to eat at them).

The trend has found its way to Omaha.

At last count, we believe there are 15-20 food trucks that do regular business around the city. Trucks are even rotating days at the new food truck “plaza” at 11th and Nicholas streets, just north of the TD Ameritrade baseball stadium. It’s a couple of blocks from the Hot Shops art center in North Downtown (NoDo).

Cuisines are as varied as the names – from Taste of New Orleans’ Cajun menu to 402BBQ’s barbecue. Each mobile kitchen has its menu specialties.

We checked out a few of the trucks in Omaha. 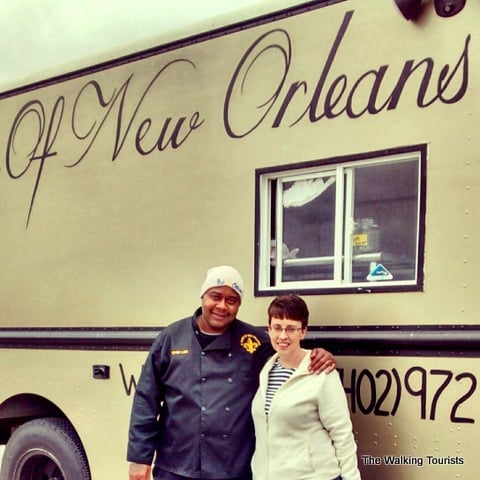 Lisa with Chef Lee and his Taste of New Orleans food truck.

Taste of New Orleans offers Cajun food on its menu. The truck has been in operation since last July.

Chef Lee moved to the Omaha following Hurricane Katrina in 2005. His brother was stationed here in the military. His mother actually came to Omaha before him, but left. She didn’t care for the winters. Understandable after she broke her ankle twice on ice.

Chef stayed. He’s grown to enjoy living in Omaha over the past several years.

His take on Cajun food can usually be found in the parking lot at Canfield’s sporting goods store, near 84th and Center. 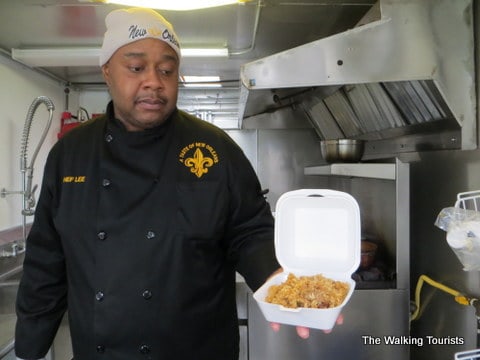 Taste of New Orleans offers daily specials – with Cajun strongholds red beans and rice and jambalaya on the menu. 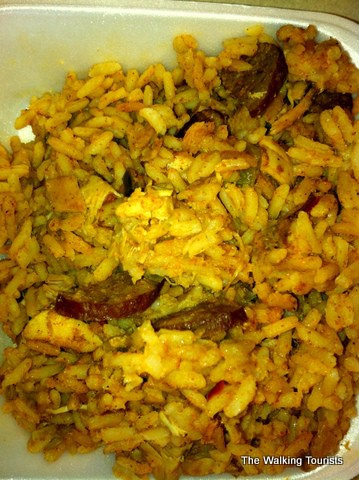 Why a food truck?

“It allows for low overhead and cheaper way to get started,” Chef Lee said. “It gets your feet into the industry.”

Chef Lee has a long history with food, starting at about age 10, when he helped his mother cook. Eventually, he attended Holmes Community College in Mississippi to study culinary arts.

His long-term plan is add two to three more trucks. 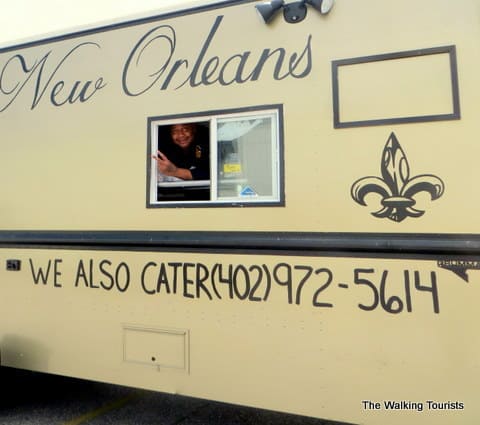 Taste of New Orleans can usually be found in the parking lot at Canfield’s sporting goods store, near 84th and Center.

Eventually, he’d love to have a sports bar with a New Orleans theme.

Scotty’s Go-Go Grill is based out of Omaha’s storied Benson neighborhood. 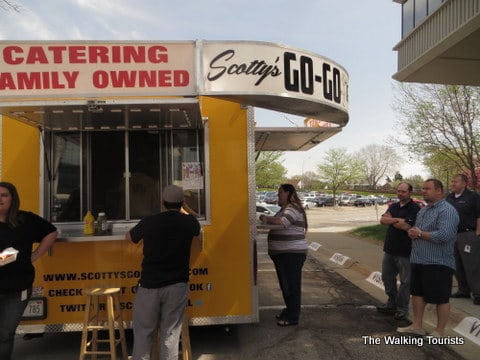 Scotty sets up business daily, rotating between the DTN building along Dodge Street and the food truck park in NoDo.

Scotty’s serves a solid variety of burgers and other sandwiches. The Barnyard Burger is a favorite among diners at the truck. 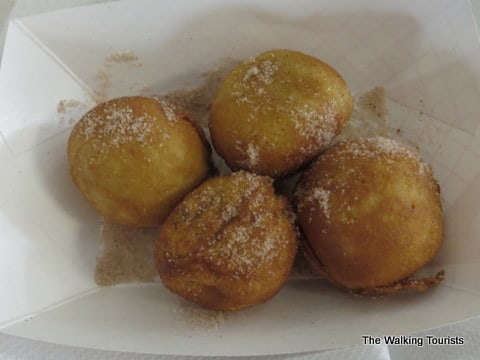 Scotty’s may be known more for his dessert – aebelskivers (Danish pancakes). His latest endeavor is a salted caramel aebelskiver.

Scotty’s may be known more for his dessert – aebelskivers (Danish pancakes). His latest endeavor is a salted caramel aebelskiver. They’re balls of dough that are quite tasty.

Lisa and her uncle enjoyed lunch at Scotty’s. Lisa had a Brie and apple grilled cheese sandwich, which she described as cheesy in the best of definitions. Her uncle enjoyed a chicken-bacon ranch wrap with parmesan fries. His lunch was also tasty. 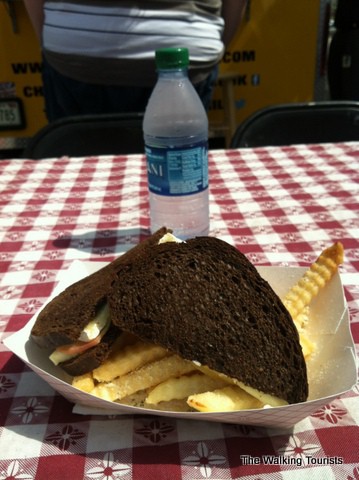 Scotty has been in the food truck business for a little more than a year, starting in April 2013. He has made a great reputation in that short time. His enthusiasm and love of the industry have played a big role.

A year ago, there didn’t seem to be a lot of interest in having a food truck in Omaha, so he was ahead of the game.

With the growth of the industry since then, he doesn’t see other trucks as competitors, but rather as a food truck “family.” He will even give shout outs and recommendations to the other food truck operators on social media.

Scotty’s long-term goal is to have a food truck empire. If his success now is any indication, we may be seeing the early days of the empire.

Our last food truck to visit on this journey is 402BBQ. 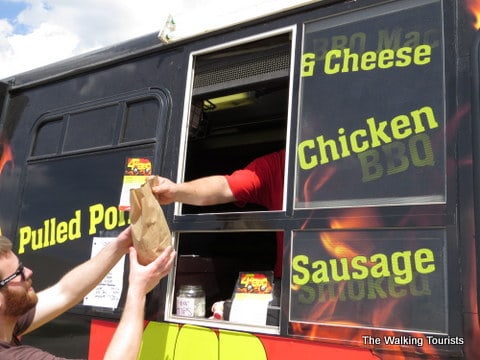 402BBQ only started service in March 2014 and already they have a following.

We met them at the Lucky Bucket brewery in Sarpy County. They have a permanent base in Benson, but also rotate a spot at the food truck park.

Husband and wife team Kelly and Todd started the truck in March. Despite being in business for a few months, they have gained a following.

The sauces range from sweet to hot.

The sweet bourbon sauce has a nice sweet taste to it. It’s not overpowering or underperforming. It’s the right mix of ingredients for a sweet, tangy taste.

The Big Red (because they are in Nebraska, you know) has a medium heat. It, too, has a nice taste to it.

The hot sauce is ghost-pepper infused.

They have an Alabama-based white sauce. It is based on southern recipes, using mayonnaise as an ingredient. Trust me, it’s good!

Todd has been involved with BBQing for years. His father taught him the art. 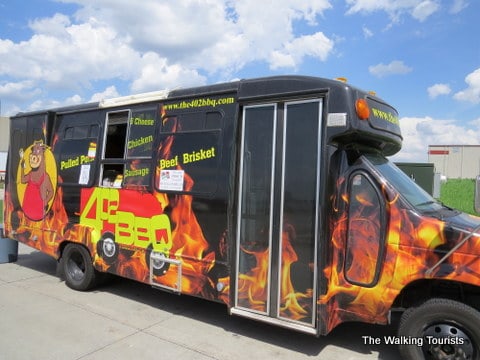 For more information on 402BBQ, check out the website.

While we have only looked at three food trucks in the Omaha area, there are so many more; each with its own story and unique take on menus. Wherever you live, give food trucks a try for lunch or dinner. You’ll enjoy a good meal and support a truly small business.

– Tim and Lisa love traveling – locally, regionally, nationally and internationally (not as often as they would like). They originally started The Walking Tourists to share their experiences with friends and family. Whether it’s across the world or in their own backyard in Omaha, Nebraska, they love to explore the sites and experiences all around us. Check out more of Lisa and Tim’s travels at The Walking Tourists!

I just had Taste of New Orleans last night! They have the best PoBoys and Cajun Parmigiane Fries ever!! Could not get enough! I will be planning shopping trips to Canfields over the lunch hour from now on!

God is awesome!!! Tears of joy!!!! My cousin Chef Lee Franklin!!!! Keep up the great work and I give all the praise to God and the people who help him through it all!!!! God is still doing great and mighty things!!! You will win if you won't quit!!!!

It's great to see hard work paying off!