Back when I was a reviewer for a newspaper and a cool aunt (perhaps self-described), I’d take my nieces to the performance and then them to a post-show treat. Usually ice cream, though, twice little Gracie and I went from The Rose down to Taste of Omaha for funnel cake and fireworks (Tip: The Rose’s season closer usually lines up with Taste of Omaha’s opening weekend). Now that my kids are starting to be fun theater companions, we’re starting to find favorites with them (things haven’t changed much, we go to the same places my nieces liked years ago).

Do you have favorites your family often goes to after a play, concert or other event? Here’s where I’ve gone with kids after concerts and theater performances for post-show treats in Omaha: 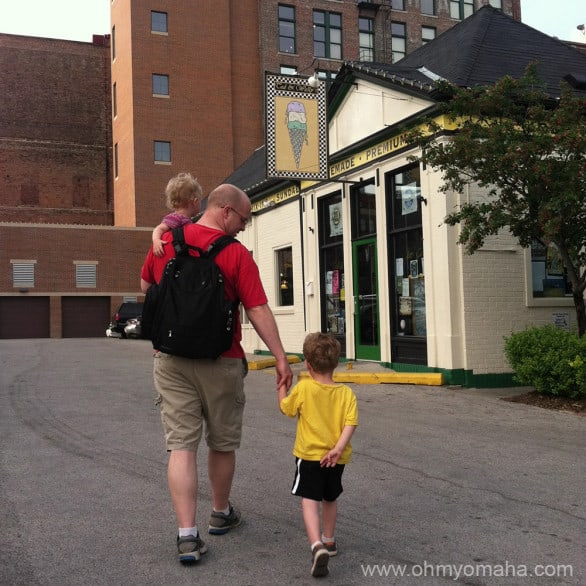 The gold standard of treats in the Old Market, the ice cream here is incomparable. Summers, expect a line, but at least it gives you time to read the available flavors on the chalkboard. Feeling adventurous? You can ask to sample an odd-sounding flavor first (they share their flavors each day on Facebook). Ted & Wally’s is good to consider after a show at The Rose, The Orpheum Theater and the Holland Center (also if you saw a show at The Bluebarn, though, you’re not likely bringing your kids to any shows there!).

I’ve escaped the Old Market hustle with kiddos by heading to Midtown Crossing and visiting this chain. It’s tasty and unlikely to have a long wait.

Also at Midtown Crossing is Delice. Pastries to die for. Do not waste sharing any yumminess with unappreciative toddlers.

Not far from the Omaha Community Playhouse is the Dundee frozen treat oasis at 50th and Underwood streets. You can sample the crazy ice cream or gelato flavors here before committing. We stopped here on the way home from taking Farley to his first concert – an afternoon performance by Dan Zanes. If you happen to go to a rare Tuesday night performance (like the Omaha Performing Arts’ National Geographic Live Speaker Series in 2014), you can head to eCreamery for $2 Tuesday tastiness. Click here to find out what today’s flavors are.

What are your favorite post-show treat stops? Is your kid’s favorite different from yours?

Hands down, Ted & Wally's. Big bonus that it's a local small business. The prices are a little high, but it's all good; their ice cream is fantastic!

You're right. Once you try Ted & Wally's, the cheaper stuff just doesn't cut it any more.

I love Ted and Wally's. They other places I haven't checked out. My son's have been wanting to go to the frozen yogurt places, so we've went to some of those.

You asked about the face plate on my blog. You can go to uncommongoods.com or City Limits had them the last time I was there. They are located in the Old Market. They only had the boy ones though. There is a girl version of that plate to.

Love browsing through City Limits, so I'll have to look for that plate next time I go! Of course with my kids, I'm certain I can't just get the boy one, my daughter will want the silly girl version. Thanks for the tip!