Omaha is known for its steaks. Our guest blogger, Bolton Carley, thinks this old school steakhouse’s updated menu is going to win over your meat-lovin’ heart. 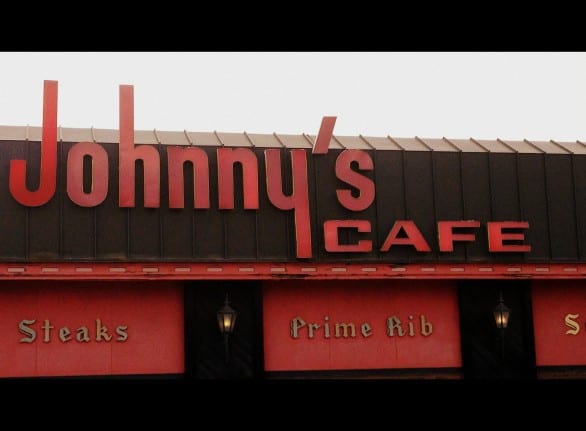 Feeling like a hot dinner date tonight?  I’ve got just the place for you:  The Original Johnny’s Café on 27th and L streets.  Built at the time (1922) in the heart of the Stockyards, you’ll find the original menus on the wall as you come in with $2 steaks back in the day.  Yes, it was your grandpa’s steakhouse, maybe even your great-grandfather’s, but thanks to an updated menu, it’s destined to be your steakhouse, too. 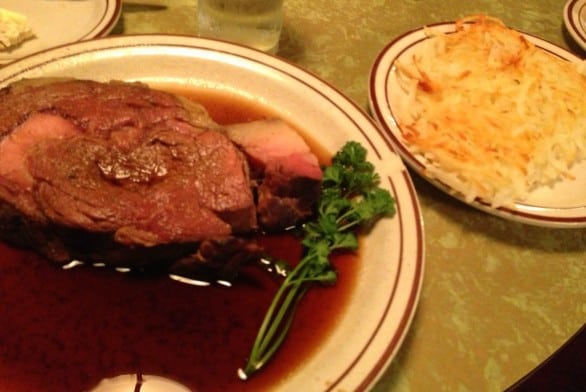 Johnny’s serves old-school favorites like orange roughy, shrimp & steak, and chateaubriand.  (Have you seen that?  Wow! It’s impressive.)   However, my favorite thing on the menu is the prime rib. Yum! Cooked to order and swimming in a perfectly-seasoned au jus, it’s supremely tender with solid flavor. We’re talkin’ the smallest cut is still so big, your homemade hashbrowns (yes, I said homemade) have to come on a separate plate!  (All meals come with homemade rolls, their specialty cottage cheese spread, and a salad, too.)  Of course, today’s menu also features new faves like a spinach artichoke stuffed chicken, a ginger chicken, a Northwestern halibut and an extensive wine list.  In fact, Johnny’s now hosts wine tastings and serves buffets on holidays like Thanksgiving and Easter complete with party rooms for family bonding (one’s even named the Shorthorn room for a cattle girl like me!!!).

I know I sound like a freaking commercial, but I can’t help it.  I’m a big fan!  When it comes to Johnny’s, not only do I love the food, but I love the atmosphere.  For you older locals, think Mr. C’s or the old 64 Club in their prime.  For those of you in the younger crowd, think a Mad Men shoot with the darkly-lit, old Italian-mob-boss feel.  With tufted, leather upholstered booths and swiveling, rolly high-back chairs to sink into and a martini to order, there’s serious ambiance happenin’.

Johnny’s Café has been named to the Best of Omaha list repeatedly.  The family-run business delivers every time.  They even try to help out with cost as they send out a monthly letter with coupons or a special deal if you give them your email.  Groupon and Living Social both feature Johnny’s occasionally, as well.  And truthfully, the food’s worth it even without a coupon.  You gotta check it out!

There’s a deal offered at SaveLocal right now for Johnny’s! Head over there now to get $45 to spend for only $30. That’s 33% discount for the non-math majors out there. Here’s the offer: http://conta.cc/13U3SC9. Your chance to snap up this deal ends Thursday, Aug. 15.

– As a self-proclaimed herder of kids, cattle, and words, Bolton Carley is a blogger, writer, teacher, photographer, and farmer’s daughter.  Check out her humorous 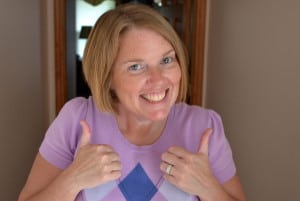 advice blog on how to be happy, her young adult verse novel, or her Facebook page for all things BC.

With all of the published hype about the Original Johnny's Cafe, we had to try it out. VERY DISAPPOINTED!!! Cold potatoes... I mean COLD! Tasteless, bland steaks, prime rib and lobster. How about cheap, instant potatoes.... And it was not inexpensive.... But what a waste of time and money!

My favorite too! Hint: Try the cottage cheese spread. (I HATE cottage cheese. It is my least favorite food. This is not the same. . .delish!) Also, go for lunch to save big bucks on slightly smaller portions!

I'm an Omaha blogger too! Looking forward to reading more about you! Now that we have a daughter, I will be looking for future activities in the Big O!!

Thanks for stopping by! Congrats on the baby girl - you're going to love being able to take her to all the fun stuff in Omaha. In the mean time, enjoy the easy portability and fairly quiet dining experiences with her. :) Your blog my kind of blog, so I look forward to following you too!

I will definitely check them out next time we are in Omaha!