Trains. Either you like or you’re obessed with them.

My son dabbles in obession when it comes to trains. He plays it cool whenever we show him a real train (I look like the excited fool, usually), so I don’t classify him as a fanatic. Do you have a fanatic in your house? 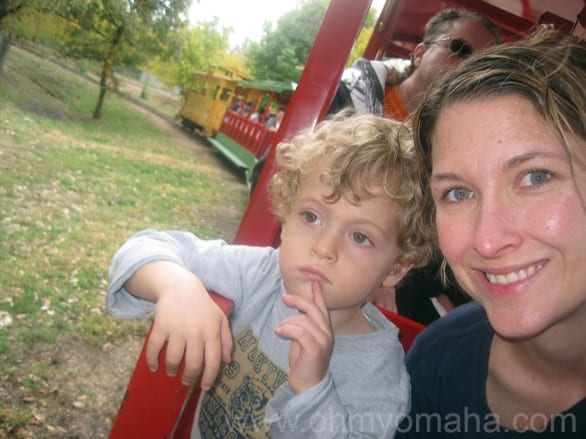 I call this one “Mommy’s smiling because you’re supposed to be having fun.”

Omaha and Council Bluffs, Iowa, are steeped in railroad history so if you’re raising a train devotee in your house, you’re in luck in this town. Here are some places to go to feed the train addiction: 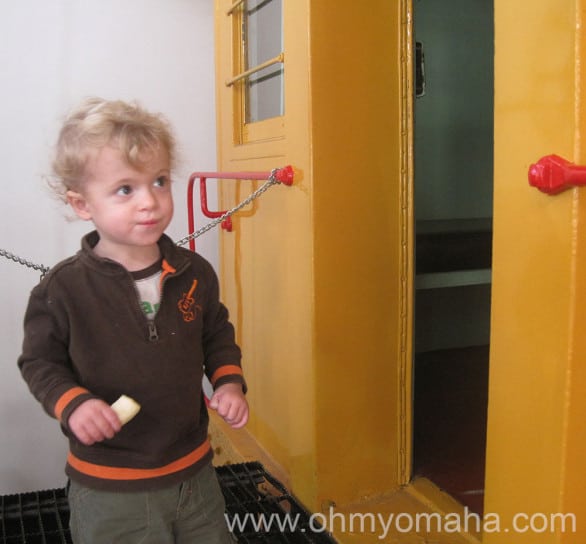 Exploring a caboose at The Durham Museum. With a cheese stick, naturally.

Let’s start at what was once Union Station, Durham Museum. Kids love the real train cars you can walk through and the O Scale model railroad exhibit, as well as ringing the damn bell over and over again (you know which one I’m talking about). While there, get some ice cream at the old fashioned soda fountain. It’s not train related, but mama’s got to keep her energy up when out and about with excited train lovers.

Lauritzen Gardens’ Model Railroad Garden featuring G-scale model trains running around a landscape of Omaha landmarks made out of natural materials is really neat to look at, not just for the kids, either.  In the winter, it’s brought indoors and runs around their poinsettia exhibit.

While at Lauritzen, jet on up the stairs to the south of the gardens to visit Kenefick Park. Check out two giant locomotives on display there. It’s free and open to the public.

In Council Bluffs, you can take your kiddos to this museum for free! The newest exhibit, “Building America,” is interactive. 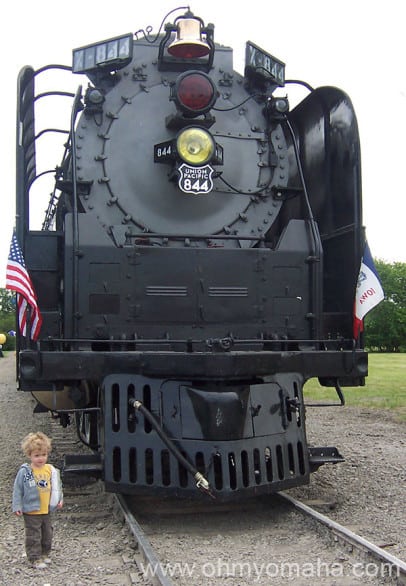 A massive steam engine Union Pacific rolled into Council Bluffs in 2012. While not actually part of the Union Pacific Railroad Museum, I wanted to include this shot because UP does this sort of thing every year. Kids love getting up close to these giants and walking through the cars. For free!

While you’re not going to spot a ton of train stuff here, I thought I’d mention this Bluffs National Historic Landmark. Dodge has been called “the greatest railroad builder of all time,” so if your train lover appreciates history, this is a good place to visit. Good to note, children 6 and younger are admitted free.

A restored train depot, the museum  features railcars on display outdoors that kids will like checking out up close. Inside, check out the large model railroad display. This museum lacks the funding of some of the other locations on this list, so it’s not as polished or new-looking, but your kids won’t care. Trains are trains.

I have yet to visit this set up at the Mall of the Bluffs, but I know and trust the reporter who wrote about it (story here) – so I’m including it. The Nebraska-Iowa Model Railroaders Club has set up shop at this Council Bluffs mall and on Saturdays, the public is invited to stop by and check it from 11 a.m. to 4 p.m. 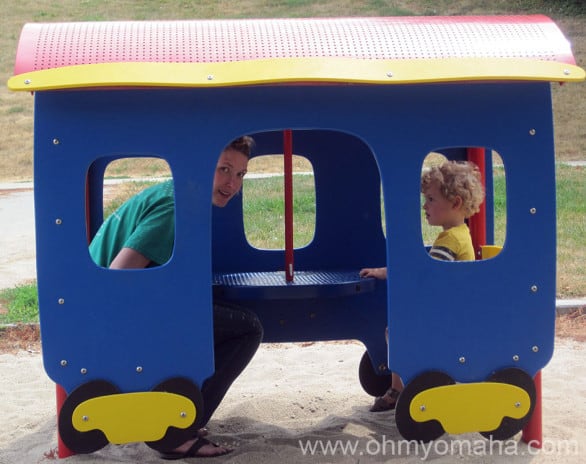 You can check out a park located in the Bemis Park neighborhood that has playground equipment shaped like a train.

OK, it’s more of a place that I’d rather go without my kids, but if since we’re talking trains, one of the newer restaurants in Omaha celebrates Omaha’s railroading history. Railcar Modern American Kitchen is at 144th and Blondo streets. The Sunday Brunch menu does have a kids breakfast listed.

Council Bluffs has the Golden Spike, which commemorates the junction of the Union Pacific and Central Pacific rail lines at the Promontory Summit, Utah, in 1869. There’s not much to see or do there, but if your kid likes trains and history, why not check it out? Along that train of thought (pun intended), swing by the Lincoln Monument while in C.B. From this site, Lincoln viewed and selected the Eastern Terminus of the first transcontinental railroad built on the United States. 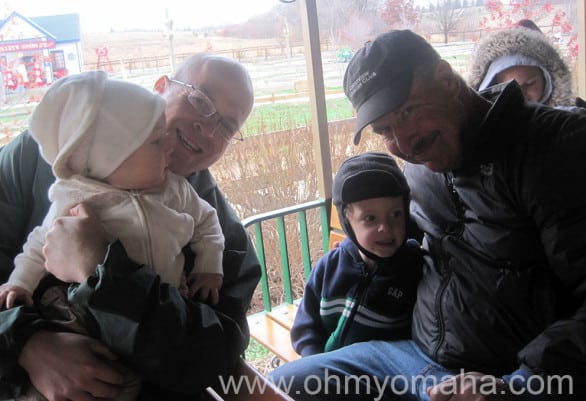 Mooch and Farley take a cold train ride with their dad and Grampy at Vala’s Pumpkin Patch.

Want to ride a train? Omaha’s Henry Doorly Zoo & Aquarium has one, as does Vala’s Pumpkin Patch.

Every July, Railroad Days is celebrated at several locations on this list There are activities planned at each place. The perk of this event is that family admission is very reasonable and it’s good for both days.

Omaha also has its share of little kid-friendly train tables where kids are welcome to build tracks and play until their heart’s content. Stop by one of the two Barnes & Noble locations, where you’ll find the train set in the children’s department. Omaha Children’s Museum has a train table in its Wiggle Room.

Treasure Moment will be at the Mall of Bluffs for the following hours if people want to get a ride on the trackless train. It is not confirmed yet if the bungee trampoline will be there or not.

You are welcome to bring your son to it! There will be incentive for free ride. Can contact Andrea Leinen at the mall for details. Her email is andrea@mallofthebluffs.com

My kids rode the train at that River's Edge event. :)

That was us! Sorry we could only stay for three hours and have to shut down before the fireworks at TDAmeritrade started. Some families were sad and disappointed that they didn't get a chance to ride on our train. Glad you like the experience!

Feel free to mention us in your blog about the services we offer. We will have events coming up for the rest of the summer and fall. Will keep you posted.

The July 3rd event at River's Edge Park in Council Bluffs had a big draw! We had a big crowd who were happy and excited to try our train and bungee trampoline! Children were running after us to get a ride. Those who did not get a ride when we shut down were sad and the parents or grandparents asked about our future events already! The bungee trampoline was a big hit as well!

We bring our musical trackless train to your events, parties, festival and every special occasions. Check us out! www.treasuremoment.com. We are the first to bring such a special and unique American made and European designed trackless musical train to the metro.