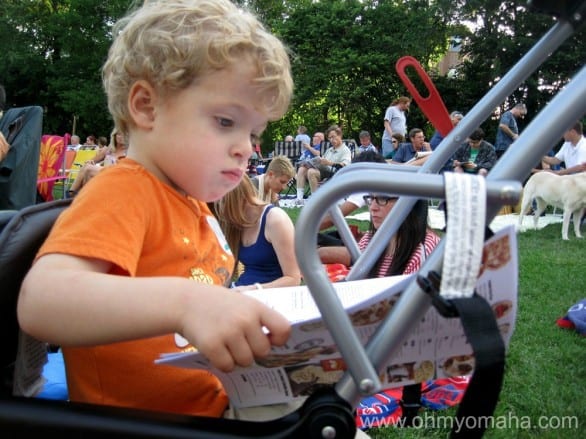 Sure, you think your kid’s smart and will occupy himself with studying the Shakespeare on the Green program. But, you’re wrong. Pack some toys.

Shakespeare on the Green is a summer tradition in Omaha. For three weekends starting at the end of June, hundreds of people pack a picnic, a bottle of wine and gallons of bug spray, and they head to that swath of grass behind the University of Omaha to watch some live theater. They go to this free event to relax outdoors.

I bring my kids and ruin that.

Kids should go to Shakespeare on the Green with their parents, certainly. It’s just a lot more work to bring them. But do it, at least once.

We’re not going this year because we still need to recover from our first trip to Shakespeare on the Green with them – the very loud meltdown, the begging for food from strangers, the unfinished beer I had to dump because of our quick exit. But, I still stand by my feeling that children are welcome and should be at Shakespeare on the Green. But, you need a game plan.

Surviving Shakespeare on the Green With Children 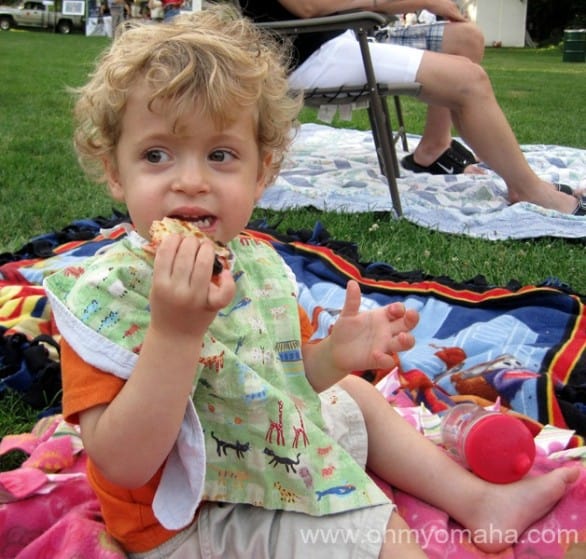 Food is essential for Shakespeare on the Green, with or without children in tow. Pizza was a hit with us, but never underestimate the power of just having a lot of snack food. Nutella is highly recommended.

Pack Smart – The Bard is great and all, but your children aren’t going to stay glued to the stage. I recommend bringing a variety of quiet toys (not throwing toys like a football, this does not amuse your neighbors during the show). Some essentials to pack, even if you aren’t bringing a rugrat: Bug spray, flashlight, dinner or snacks, and something to drink. And alcohol (don’t forget the corkscrew or bottle opener). You’ll also need something to sit on, so chairs or blankets.

Sit Strategically – You may need a quick escape with a rily child. I sure did and there is nothing fun about weaving through an attentive crowd with a Sit-n-Stand stroller over grass while two children sob. There’s also nothing quick about it. So, sit near the back or on the outskirts of the crowd on either side. 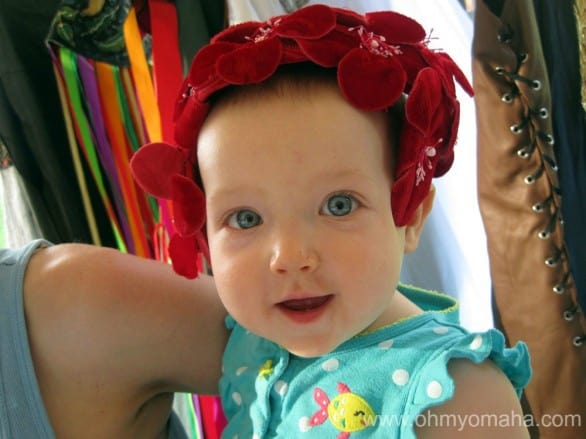 Mooch in the dress up tent at Shakepeare on the Green, at approximately 6:55 p.m. – The Danger Zone. She may look incapable of mass destruction, but believe me, when she was under 1, we took her out after 7 p.m. with the understanding that our child may turn into a Gremlin at any moment.

Go Early – Seems counter-intuitive, but this is a good idea if you’re bringing children who have the Cinderella complex like Mooch. She’s wonderful until a certain hour of the evening and then she’s unpredictable and on a short fuse and then we have to leave like 5 minutes ago. Go early and enjoy the pre-show activities and absorb the atmosphere. Then, when you inevitably have to leave at intermission – or worse, right in the middle of the quietest part of Act I – you won’t feel like you missed as much. 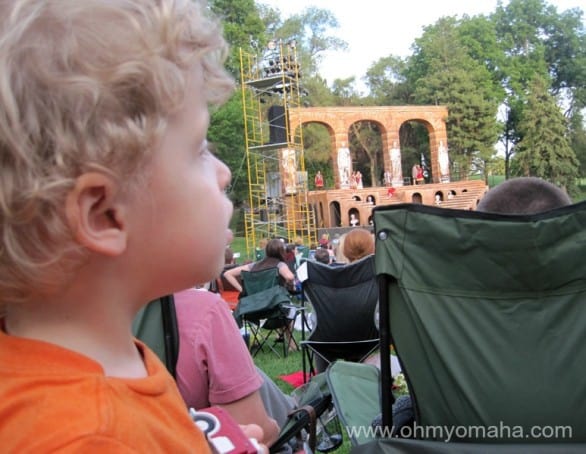 Discuss – Since you got there early and all, read through the program and explain in simple terms what will be happening on stage. The people behind Shakespeare on the Green do remarkable things and present very entertaining theater, but it’s still not easy to follow, especially if you’re more comfortable with “Curious George” 12-minute stories. If your child seems interested, talk about the action over intermission. See if he can tell you what happened. Ask him what he thinks of it. 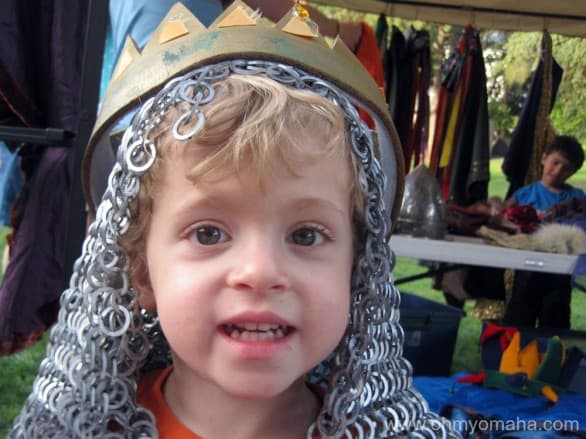 King Farley in the dress up tent

– Visit the dress up tent with the kids. It’s just fun to check out and get all Elizabethan with your family.

– Bring some cash to donate to this free community event. Have your child put the money in the bucket.

– There are two shows presented each year. This season, it’s “Twelfth Night” and “Titus Adronicus.” Word of warning, “Titus Adronicus” has mature content and is graphic in nature, so parental discretion is recommended.

Thanks for this....I've been considering taking my kids, but wasn't at all sure about the setup (we've only been in Omaha for 6 months now)...I think it will have to wait until Youngest is a bit older, and Eldest is a bit more...mature, let's say. :) PS I originally found you on Pinterest, and was thrilled! There's another Omaha mom who blogs about Omaha goings-on, of the geeky persuasion; if you don't already know her, you might find some stuff on her blog as well : http://www.ageekabouttown.blogspot.com

Cool, Pinterest works! I'll have to tell my husband since he mocks my love of Pinterest. :) Thanks for visiting!