My husband sometimes pokes fun at me because he suspects I may be an 80-year-old stuck in a 30-something’s body. On more than one occasion, I’ve planned dates to places where we were the youngest in the building by 40 years.

So I question my judgement on things sometimes. 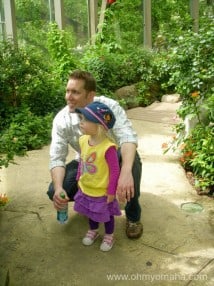 When it comes to this blog, I wonder if dads read it or find it helpful. In case I don’t “speak” to that male demographic, I’ve enlisted some Omaha dads to help me out. They provided a lot of ideas that suit all budgets and all ages.

Here are dad-approved outings in Omaha:

“Our son loves trains, cars and planes, usually in that order. We recommend:

– Kennefick Park (next to Lauritzen Gardens)

– The car show at the CenturyLink Center

Also, and this is our most regular stop when the weather cooperates, we love hiking at Hitchcock Nature Center, about 20 minutes northeast of Omaha on the Iowa side of the river.

What else… We eat on South 24th Street … shop the Old Market when we need to get mommy a gift … go sledding at Memorial Park.” – Shane, father of one boy, age 2 (and another boy on the way)

“We like going camping at Two Rivers and Platte River State Park … going to the zoo, walking through Cabela’s (never buy anything, just look at the fish and gear), and sitting on the berm at Storm Chasers games.” – Matt, father of two boys, ages 4 and 2

One dad asked his 4-year-old daughter for her favorite daddy-daughter outing.

“Some of her favorite memories were me taking her to the ferris wheel inside of Scheel’s (that she had been waiting to get tall enough to ride – ever since she first laid eyes on it.)…

“Other than that, we have taken her to the children’s museum, Fontenelle Forest, the zoo and the Rose Theater a couple times, all of which I know she really enjoyed. And really not too expensive.

“Ultimately, most of our outings are just close to home, though – like trips to the park inside our neighborhood development, or along the trails that span along the tree lines.” – Aaron, father of two girls, ages 4 and 1 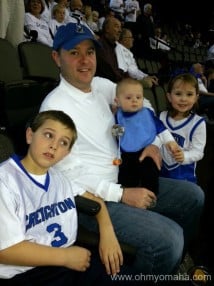 “We liked walking around the farmer’s market downtown last year.

“These aren’t free but they are this dad-approved: Stormchaser games, Creighton basketball games, the zoo and the children’s museum.” – Rob, father of two boys and a girl, ages 7, 4 and 6 months

“Now that they’re 16, it’s tough to get my kids out of their bedrooms, but before that we liked hiking at Neal Woods; we enjoyed monthly trips to Joslyn Art Museum, HotShops and of course the zoo, which they never seem to outgrow. Now, at 16, they like exploring the Old Market, Benson, South 24th Street and the Slowdown area. As teens, it’s more about unique shopping experiences.” – Fred, father of two boys and a girl, all 16

It's fun to let the dads plan once in a while. Proves that the kids don't really need anything over the top. Just some time with dad is a great thing! Great suggestions from all the dads.

Isn't that the truth? I love it when my husband plans things for us.

I love that you took this angle! It's always interesting to me that my husband and I have very different ideas when it comes to what constitutes an "outing" with the girls. I think kids benefit from a variety of activities, so I guess everyone wins. Thanks for sharing!

Thanks, Thea! I was curious to see what they all would come up with, and I knew I'd get some good ideas I could turn to when the kids get a little older.