I love summers in Omaha, and a big reason is that there is always free, live entertainment every weekend. No matter where you live in Omaha, a free outdoor concert is not far away. I have a list of free 2018 concerts if you’d like to see who’s playing where this summer. 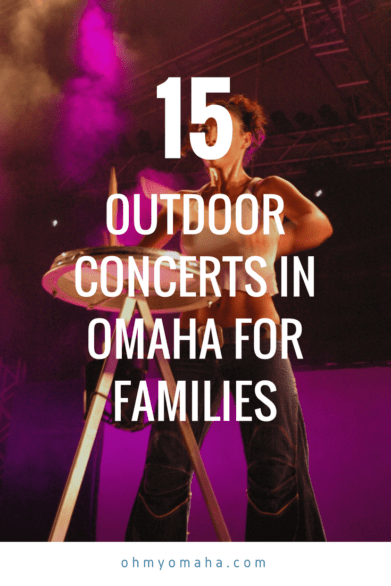 We’ve been taking the kids to outdoor concerts since they were little. Some of my family’s favorite memories include dancing by the stage at Jazz on the Green.

Let’s head east to west, shall we?

– Downtown. On the weekends, you’re almost guaranteed to stumble upon a festival with live music. Most festivals are free. Most. Check before going if that’s a concern. Sure bets are Taste of Omaha and the Omaha Summer Arts Festival, as well as the smaller ethnic events (Greek and Italian festivals are fun ones).

If you head toward the river, there’s a series of concerts by the Bob Kerrey Pedestrian Bridge called Bridge Beats. My son and husband hanging out at a concert in Stinson Park, a large green space at Aksarben Village.

Midtown Crossing’s Turner Park is home to Jazz on the Green (disclosure: I work for Omaha Performing Arts, who helps put this shindig on), the Thursday night throwdown every mid-July to mid-August. Music starts at 7:30 p.m.; the green opens at 5 and people are there waiting to claim a good spot. Expect a big crowd – so if that overwhelms you, stay clear. 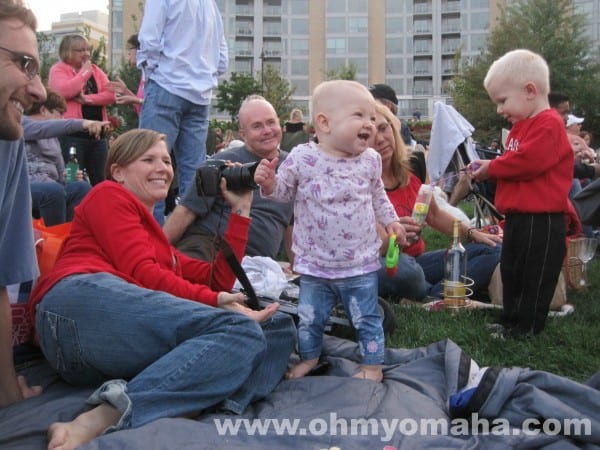 Mooch wasn’t quite 1 when she went to her first Jazz on the Green concert.

Turner Park has more concerts throughout the summer, so check back at Midtown Crossing’s site to see who’s playing the End of Summer concerts.

– In Springfield, you can enjoy free concerts year-round at Soaring Wings Vineyard. Summer time is my preferred time to go since it’s outside then and it just seems more kid-friendly (plus you can bring your own food to the outdoor concerts – not your own beverages, though). Loose Cannon had a blast last year begging for food from tipsy strangers (I had a “blast” not sitting down the entire time while I chased the little stinker).

– Head out to Papillion’s Shadow Lake Towne Center, 72nd Street and Nebraska Highway 370, for free concerts on Fridays this summer starting at 6:30 p.m. Papillion also has a Concerts in the Park each summer. These are held on Wednesday nights to coincide with the farmer’s market at City Park, 84th and Lincoln streets.

– LaVista has a cool movie and concert combo each month in the summer. The series is held on select Friday nights starting at 7 p.m. outside of the La Vista Public Library, 9110 Giles Road.

– Ralston has concerts on Thursdays starting at 6:30 p.m. at the Downtown Gazebo, Main Street and 77th.

– Council Bluffs is growing its music scene and a big part of it will be held at River’s Edge Park, located on the east side of the pedestrian bridge over the Missouri River. It’s grand opening celebration will include a free live concert by the Beach Boys on May 25 and a free Memorial Day concert put on by Playing With Fire on May 27 with the headliners the Sharon Jones & The Dap-Kings.

** Many of the above concerts – in fact, most – involve musicians from the Omaha Musicians Association. They put on more concert than I listed here, and in more parks and surrounding communities. So, visit this site if you want to find the concert closest to you.

A category of their own is the mega one-night-only free concerts in Omaha. You’ve got the Bank of the West: Rocking Omaha Concert at Memorial Park (usually the first Saturday in July). Playing With Fire is a blues mainstay that has expanded beyond one-night-only, and now includes multiple free concerts.

What to bring to an outdoor concert?

Seating is generally not provided, so bring along chairs or a blanket. Most allow you to bring food and drinks, but double check before you haul your massive cooler with you. Toys or other things to entertain your kids once they’re done busting a move (have you seen my busy bag post, mmm?). Do kids still say busting a move? Never mind.

Did I miss any big outdoor concerts? What’s your favorite?

Thank you for sharing this info. I'm a Lincoln resident and trying to share my music in Omaha area. Anyway I can speak with you? Just wondering if you are in the music business. I'm a member of Lincoln Arts Council, Nebraska Arts Council, Chapel Records Artist, performing artist and guitar professor at Union College.